An Egyptian Artifact in Madrid: Temple of Debod 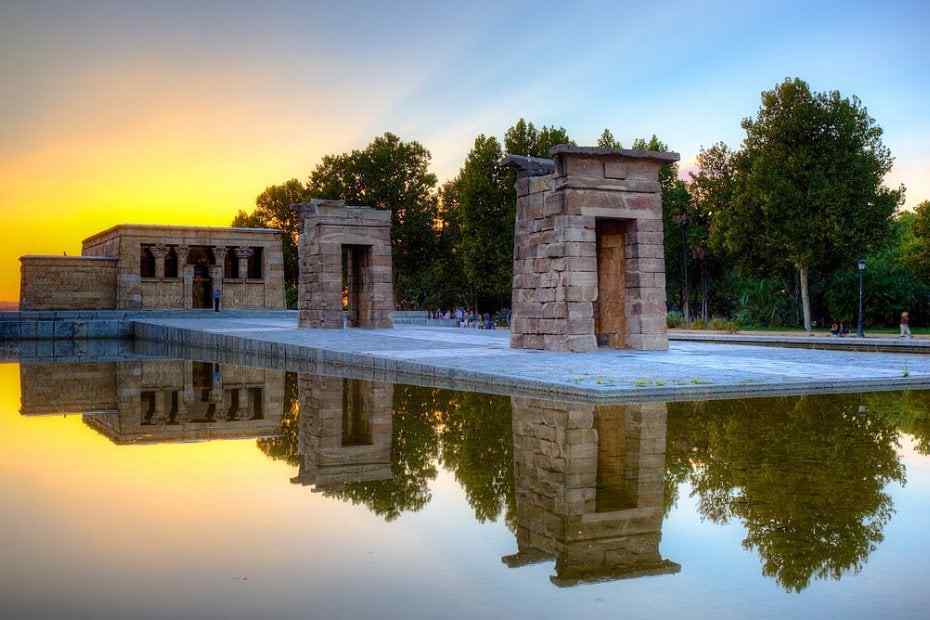 As crazy as the title sounds, there is an Egyptian artifact of thousands of years that lie somewhere in Madrid. City of fortune, history, and art, Madrid has a rich history with countless important events that shaped today’s world. With the amazing value of Madrid, it sure is a city that must be visited. With the beauties and specialities it possesses, Madrid establishes a unique style and characterizes itself like no other city in the whole world. One of these features that enrichen Madrid is a rather unique one: the Temple of Debod. Madrid is not precisely the original birthplace of this temple, but through series of events, it is now the home of this tremendous historical artifact in a square called “Calle de Irun.”

History of Temple of Debod

Located initially near a cataract of the Nile River in Nubia, the Temple of Debod was a temple devoted to the god Amun at the beginning of the second century before the common era. Built by the orders of the Kushite king of Meroë, this temple was merely a single-room chapel upon its construction. Where this chapel lay has originally been a region that saw a great number of rebellions and uprisings. Ruler of Meroë kingdom, Adikhalamani took advantage of rebellions against Ptolemy IV, extending his rule over southern parts of the region, where he built the Temple of Debod. Following the reign of numerous kings from the Ptolemaic dynasty, this chapel was extended on all sides, forming a temple-like structure. This stone-built temple wasn’t constructed as a whole until the efforts of Roman emperors Augustus and Tiberius. With a long heading path supported by stone-built walls, the road leads through three stone gateways and to the temple itself. Behind the gates, there is a sanctuary of Amun, a room where the offering table is stationed, several sanctuary rooms and a stairway to the rooftop.

Madrid and Temple of Debod

Well, one question may fill your thoughts since this temple was built and stationed in Nubia, Egypt – how did it find its way to Madrid? Following the construction of Aswan High Dam and Spain’s care over historical values, a series of events led to Temple of Debod finding his new home in Madrid. In 1960, the Egyptian government started the construction of Aswan High Dam, which posed a threat to numerous monuments, historical sites, and archaeological sites. It would increase the level of water bodies in a large region. With the following research, UNESCO made an international call to find a resolution for manners to protect these historical values in the best way possible. As Spain was among countries that had an urgent response and care for such occurrence, especially during the saving process of Abu Simbel temples, the Egyptian government donated the Temple of Debod to Spain in 1968. Transferred and rebuilt in a park located in Madrid, this temple started to open its gates for visitors in Spain in 1972. According to some researchers, this temple was facing some exposures as of our day and should be covered. Since February 2020, the Madrid city council managed to protect it from such damages.

With such an interesting journey from continent to continent, the Temple of Debod is essentially an Egyptian artifact that now lies over the soils of Madrid. Temple of Debod sure is a sight to be visited if you find yourself in Madrid with its beauty and mesmerizing appearance.