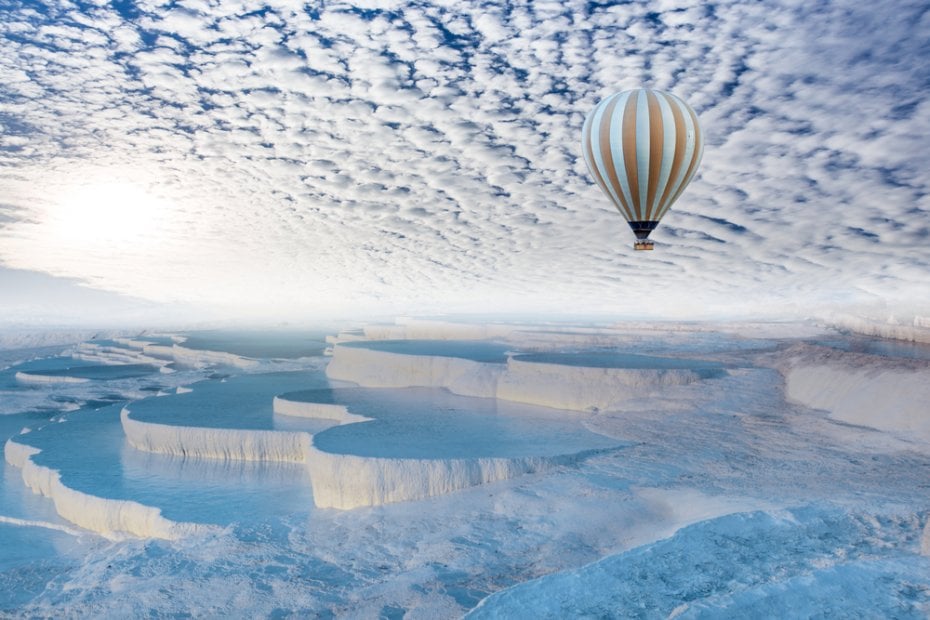 Denizli, which is one of the most important provinces in Turkey. Pamukkale are located here and every year, it is flocked to local and foreign tourists. This fascinating cotton area in the Büyük Menderes Basin as a result of earthquakes 400 thousand years ago is made up of carbonates and minerals found in the spa water. Pamukkale Travertines, which are located at the foot of Cokelez Mountain and which are 100-150 meters high, consisting of spring waters and terraced hills, are among the natural beauties that foreign tourists especially want to see. Travertines, starting from the area called the Pig Pit continues to a large area up to Çaltık Creek. This natural miracle of thermal waters is known to be 50 meters high, 3 kilometers long and 250-600 meters wide.

The formation of the Pamukkale Travertines is caused by thermal waters coming from the spring. The waters cover a long distance of 320 meters and fall into snow-white layers. Carbon dioxide and carbon monoxide fly away as the water containing calcium carbonate, sulphate, sodium, potassium, iron and free carbon dioxide evaporates by contacting with oxygen and leaves only calcium carbonate. The resulting gel layer solidifies into crystalline rocks. There are seventeen hot water areas in the area named Pamukkale because of its cottony appearance, softness and whiteness. Thermal waters of 33-35 ° C temperature of these healing waters, is a cure for visitors. Pamukkale, known for its rich and healing waters for 2300 years, has been used as a spa-cure. These waters are said to be good for digestion, breathing, circulatory problems and skin diseases. The historical importance of the ancient city of Hierapolis in the vicinity is another factor that increases the value of the region. 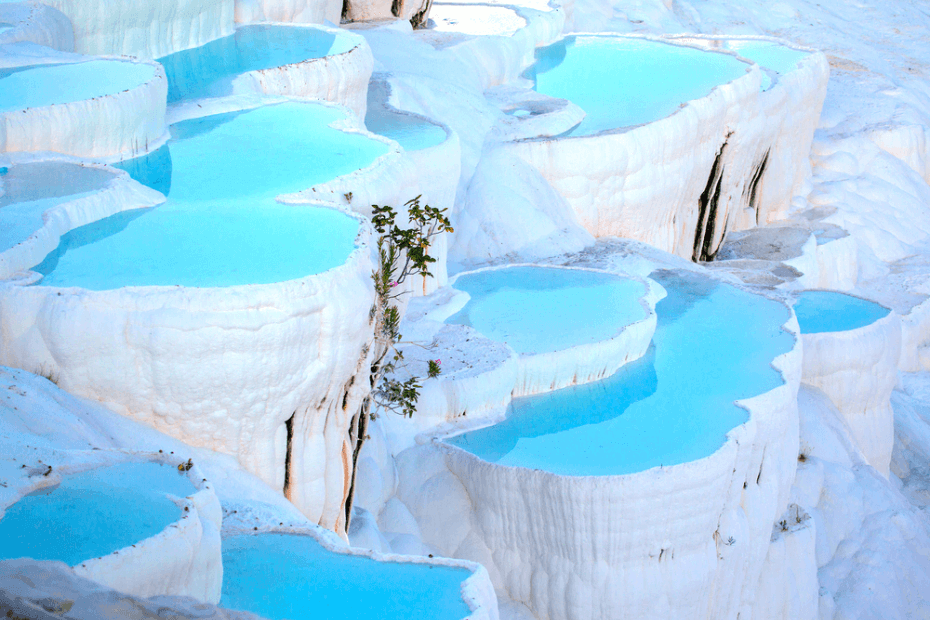 Find out more about Pamukkale Travertine

It can take about four or five hours to visit Pamukkale Travertines, the wonder of the world, fairy tale. The magnificent view of the travertines, which fascinates the visitors, is also worth seeing in the evening. It is said that the reflections created by the charming colors of the sky at sunset hours on the rocks resembling white cottons are much more beautiful than the view during the daytime hours. For this reason, local and foreign tourists spend long hours here to capture this miracle of nature.

The removal of shoes at the entrance to travertines is considered one of the most important rules. Visitors are advised to buy bags for comfortable carrying of shoes while visiting the region, and to keep their identities with them for issuing Museum cards in order to make entry and exit easier. Pamukkale welcomes its guests with great care and has hotels of normal and conservative standards, camping areas, restaurants and cafeterias. It is recommended to go to Denizli in April and June, when the summer months are quite hot. Pamukkale, where the most beautiful shades of green can be seen at the end of spring, is waiting for its visitors. The area is open to visitors every day of the week and only the museum part is closed on Mondays. Entrance to Travertines is at 08:00; the exits are determined as 21:00 between April and October and 17:00 between November and March. You can go to Pamukkale by private car to get to this magnificent natural beauty by public transport from Denizli bus station with Pamukkale minibuses. 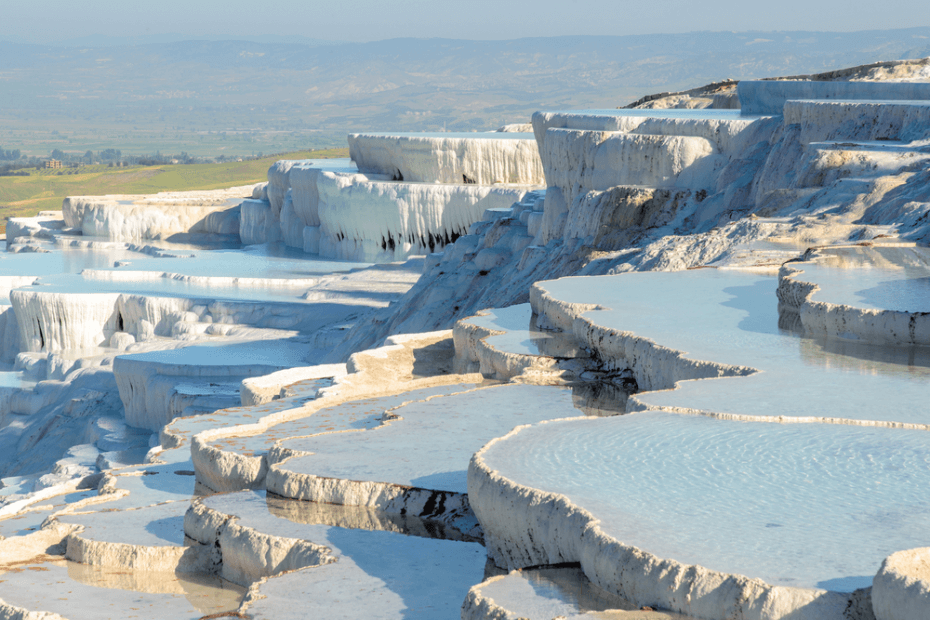 Pamukkale Travertines as well as Cappadocia remains important second natural conservation area of Turkey. Travertines, which have been in service for nearly a thousand years, are known to be one of the 29 UNESCO World Heritage sites with their natural and cultural characteristics. It is expected that the requirements of this title will be implemented and that natural beauty is best preserved. It focuses on the organization of the region and the importance of visiting the travertines in accordance with the rules. Many years ago, due to the carelessly wandering on the layers of calcium that has not yet solidified, the rules of the region are brought in order to avoid the same fate of the blackened cottons. Nowadays, the terraces of travertines cannot be accessed. Visitors can swim in travertines with hot thermal water if they wish, but the entrances must be made without shoes. It is strictly forbidden for the visitors to take pieces from travertines for souvenir purposes. This magnificent beauty, which took years to form, is considered one of the biggest damage to nature. However, the part of the ripped piece begins to darken over time and loses its white color, which gives the charming beauty of travertines. For this reason, the measures taken to preserve the forms have been made quite strict by the authorities. It is known that the hotels in the vicinity have been moved away from the region and rebuilt. Measures are also taken that the vehicle entrances and exits are taken a little farther in order to prevent damage to the travertines. Preserving this fascinating world heritage does not stop there. In order to prevent moss retention over time, continuous water flow from the source is not sufficient and supported by extra water drainage systems, the situation is kept under control by Pamukkale Municipality. On the back of the fairy tale Pamukkale Travertines, it is emphasized by the visitors that you should not leave the region without seeing the ancient city of Hierapolis and Cleopatra pool, which is an important historical building belonging to the Phrygians.