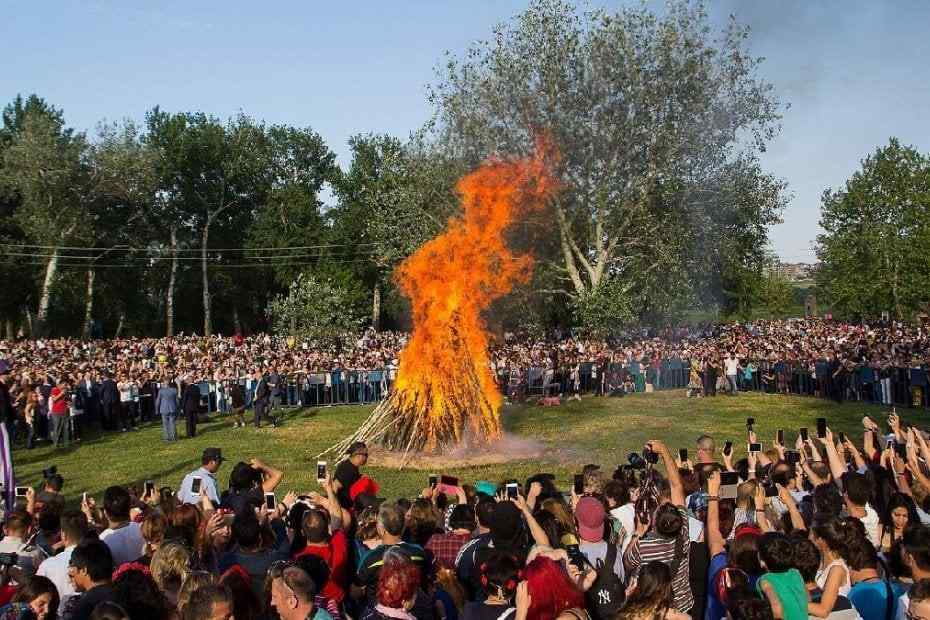 Hıdrellez, also known as Hıdırellez, is a seasonal event held by various cultures commonly near Balkans, Anatolia, and the Middle East as well as Central Asia. Also called ‘’Day of Hızır’’, Hıdrellez is celebrated on the night of 5th May as a welcome to the fertile days of spring and summer. This day’s mythological importance is assumed to be that 5th May was the day that helper of people Hızır and ruler of seas Ilyas met. As it is celebrated as Hıdrellez among Muslim and Turkic cultures, this day is celebrated as the ‘’Saint George’s Day’’ by many Christians across the globe. This common celebration of spring establishes a peaceful and shared joy between the communities. Such a welcoming event manages to produce a firm and strong bond between everyone.

As the topic of the origin of such an event brings up many disputes among people who celebrate it, it is impossible to credit only one cultural identity to create this festival. Some would argue that Hıdrellez is a product of central Asian Turkic tribes, as some would say that it dates way back to ancient Persian Kingdoms. Apart from the disturbances of such matter, Hıdrellez is a fruitful event celebrated with shared joy and excitement among many different cultures. There is a remarkable similarity between Hıdrellez and the ‘’Tammuz’’ event of Mesopotamians celebrating the awakening power of Euphrates and Tigris rivers with the upcoming summer. Such closeness between these events shows the influence of different cultures and their interactions.

People celebrate the upcoming warm and fruitful days of spring and the awakening of nature in different ways during Hıdrellez. Generally, the celebration of Hıdrellez by the Anatolian people is done by wearing white, clean clothes and gathering up in green open lands. Celebrations of Hıdrellez are commonly done in grasses filled with rivers and water bodies. In these meadows, people pick up flowers, play different games and slaughter the first sheep of the spring. It is common for people to boil the flowers that were picked during the events. It is said that drinking this boiled water will cure any diseases, and it is believed that anyone who cleans themselves using this water for forty days will become younger. As a sign of the trust of common folk between each other, their houses, barns, purses and doors are left open, and it is believed that Hızır will provide them with the blessing he has. The most known tradition of Hıdrellez is that people lit up a great fire in the evening, jumping over the fire while traditional music is played in the background.

Also known as Khidr of al-Khider, who is known as a Servant of God that is narrated commonly in the Quran. In the common Turkic belief, it is said that Hızır is a man of great knowledge and a kind narrator that has drunk the water of life, accessing immortality. It is noted that Hıdrellez is celebrated as the days when Hızır joins among the men and shares his great knowledge and property with people. As some say, Hızır is not a historical figure but a common identity shared by people of wisdom.