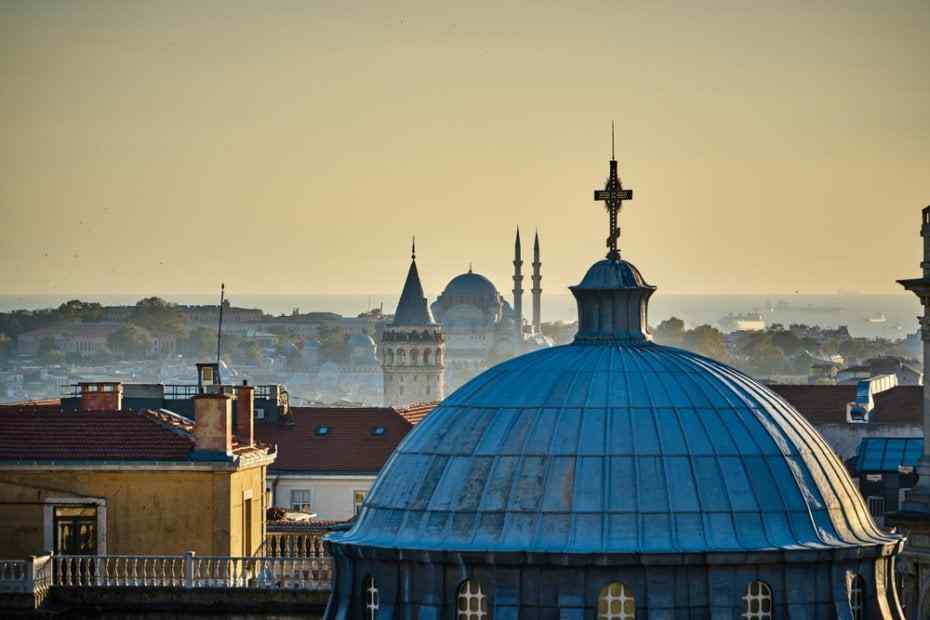 Istanbul has been a very important city throughout the world history. The city, which was the capital of the great empires due to its geographic location, was based on 2500 years ago, while the ruins of the Yenikapi excavations show that Istanbul has an 8000-year history. The city, which has been home to various cultures and civilizations throughout this long history, is home to various faith groups and religious structures that live side by side in peace, even though it is predominantly Muslim today. Here are the historical churches, one of the cultural treasures that make Istanbul a special city…

In Istanbul, there are many buildings that were churches during the Byzantine Period, and after the conquest of the city, some of them were converted into mosques. The majority of the Byzantine church buildings that are in use in the Historic Peninsula are on a line extending from Edirnekapi to Laleli on the slopes of the Golden Horn. Apart from these, there are singular examples on Vatan and Millet Streets, Kocamustafapaşa and Sarayburnu districts. 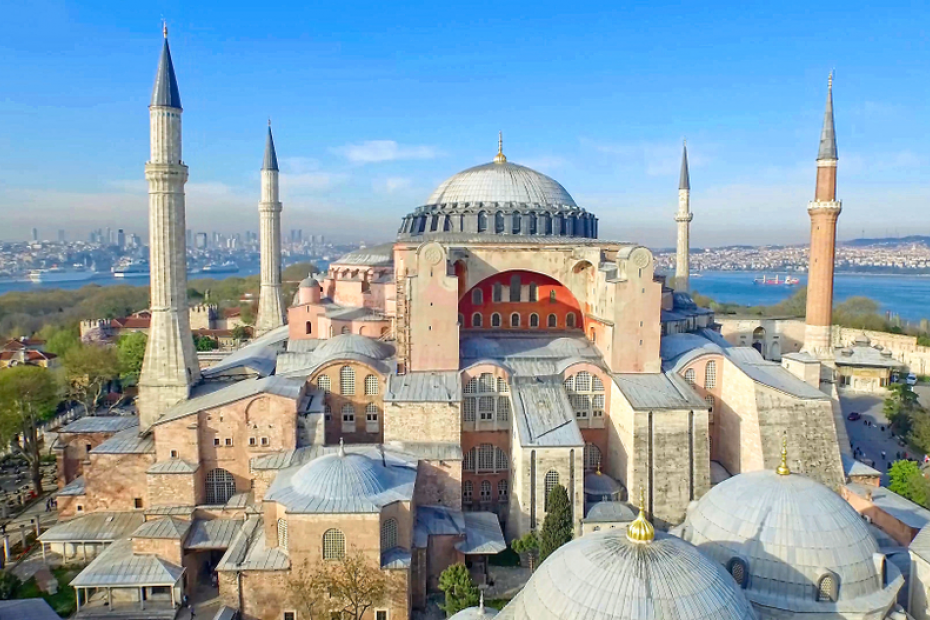 Hagia Sophia, one of the magnificent monuments of Istanbul, has attracted the attention of the world for centuries with its history and architecture. In the Byzantine period, Hagia Sophia was regarded as the private temple of the Emperor and important ceremonies were held here. Ottoman sultans saw Hagia Sophia as a symbol of the conquest because it was the largest Mosque near the palace as the Palace “ Mosque’’ . After transforming the Hagia Sophia into a mosque, Fatih kept the shape of the building and covered the paintings with whitewash. Hagia Sophia has been used as a museum since 1935. 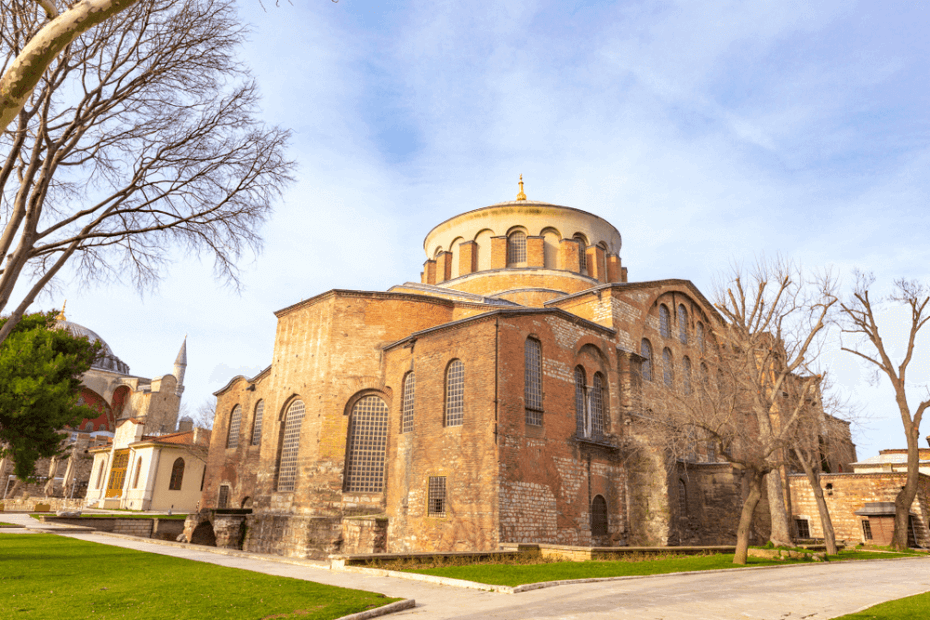 It is located in the outer courtyard of Topkapi Palace in Sultanahmet Square. The church, which was included in the construction of the Topkapi Palace in 1464, was formerly used by Christians in the palace. The first museum studies started here, and artifacts sent from various places of the Ottoman Empire were collected here as two separate sections under the names of "Ancient Weapons Collection" and "Antiquities Collection".  The Hagia Eirene Church, which was added to the Hagia Sophia Museum in 1939, is now used as a concert and show center. Especially because of its acoustics, it hosts classical music concerts. 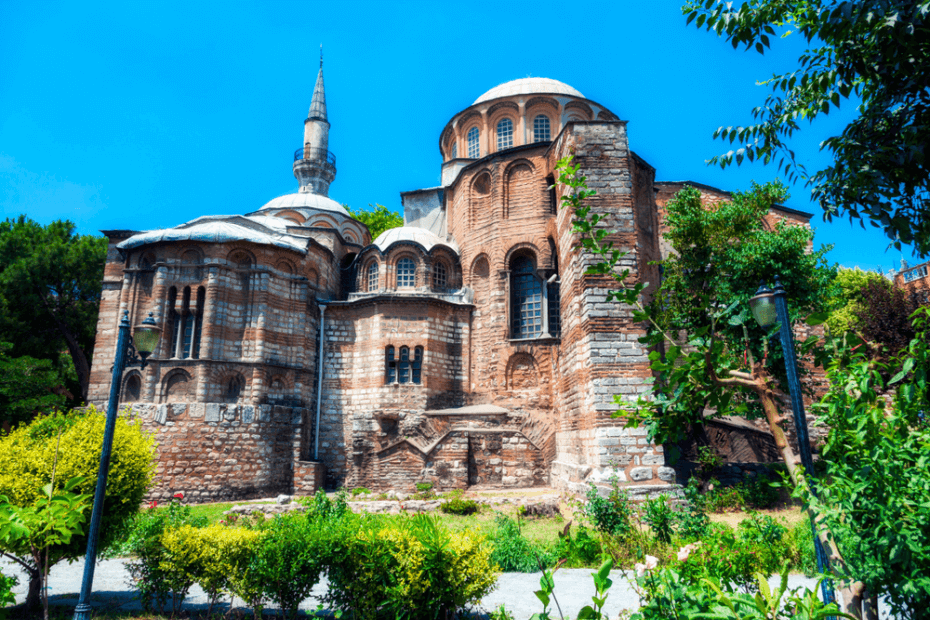 It is located in Kariye Mosque Street in Kariye-i Atik Neighborhood in Edirnekapı District. In the beginning of the 16th century, Hadım Atik Ali Pasha converted it into a mosque by 1948 and it has been included in the administration of the Hagia Sophia Museum, and it still serves as a museum. Khora Monastery Church (Chora Church) has been undergoing various restorations since 2013. The mosaics in the Chora Museum are rare examples of Byzantine art. 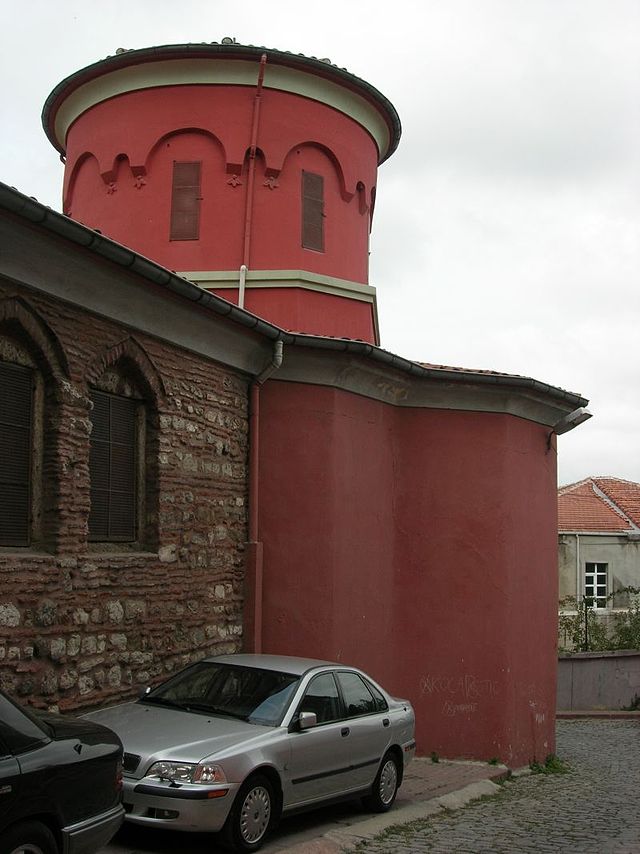 The Church the Virgin Mary (Panayia Muhliotissa Church) is located in a small courtyard in Tevkii Cafer Neighborhood in Fener district. The Virgin Mary Church, also known as the Mongolian Church, is the only church that was built during the Byzantine period in Istanbul and currently is open for worship. 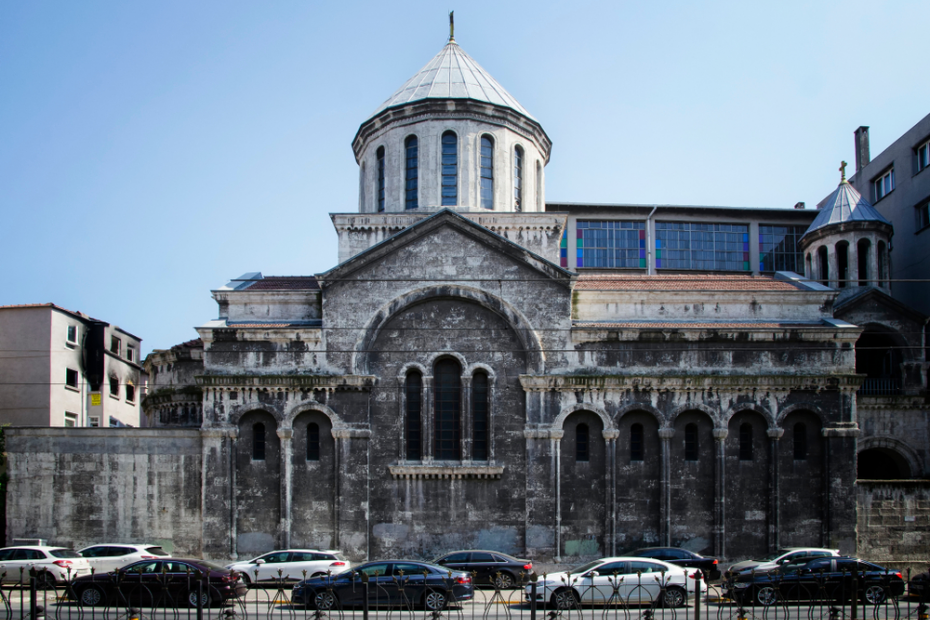 Surp Krikor Lusavoric Armenian Church, the oldest known Armenian church in Istanbul, is also known as the only church building among the churches in Istanbul built in the traditional Armenian architectural style. During the last period of Byzantium and after the conquest of Istanbul, it was the main center of the Armenians who migrated from Anatolia to Istanbul until the establishment of the Armenian Patriarchate's monasteries in Samatya with the order of Fatih and maintained this feature for centuries. 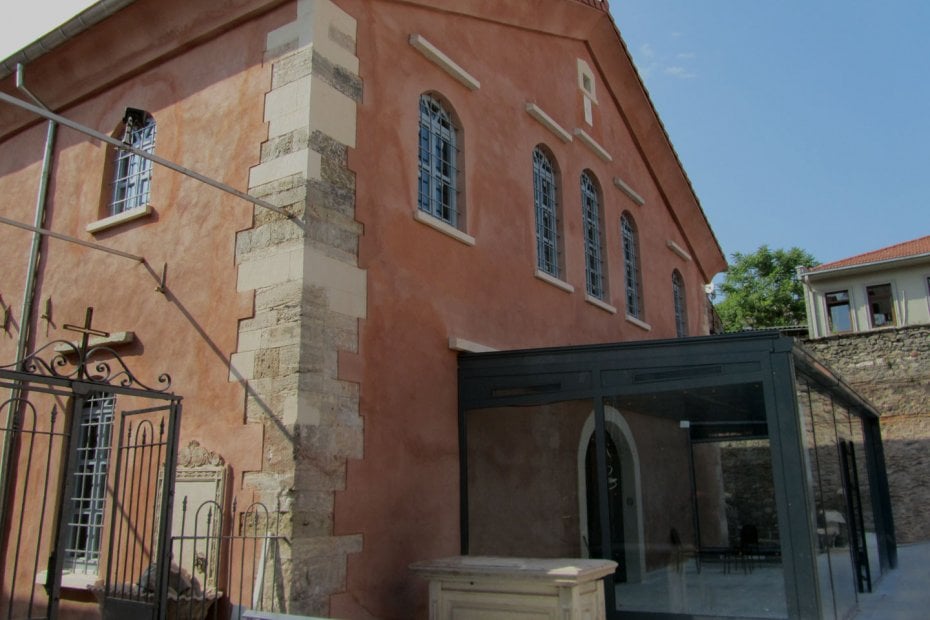 The church which means “ children of Lightning’’  is actually a Byzantine church and started to be used by the Armenian community after the conquest of Istanbul. The Vortvots Vorodman Armenian Church, the largest church in Istanbul that has not been used for 100 years, has been restored and recently reopened. The church, which has been restored within the scope of 2010 Istanbul as a Capital of Culture Project, will serve as a cultural center by preserving its feature as the place of worship and serving as a religious center on certain days while it will be able to host artistic activities such as theater and concerts on certain days. With the new function that the church will gain, it is foreseen to be an alternative activity area to Hagia Irene in Istanbul. 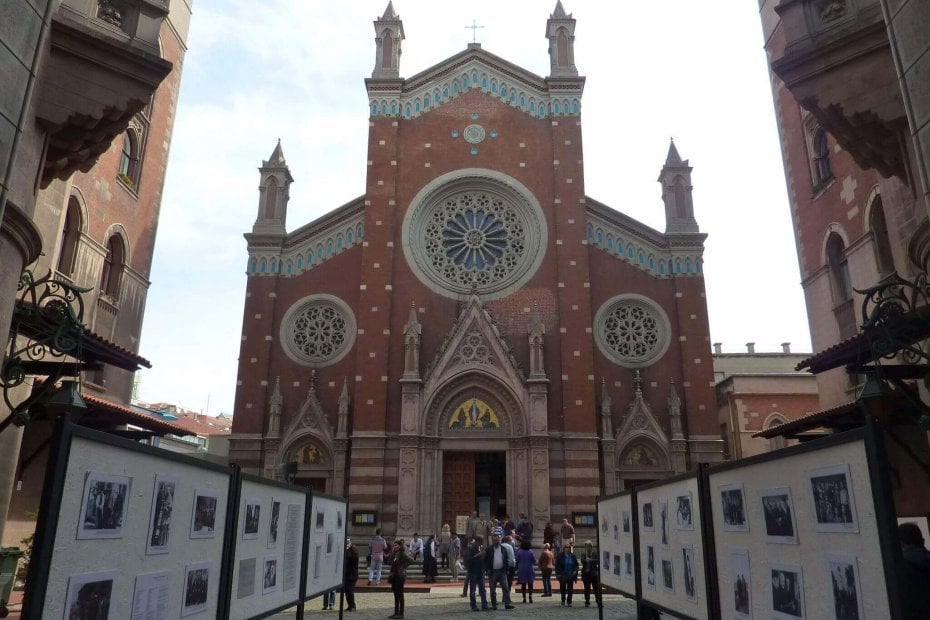 The congregation of the church located on Istiklal Street, are Italian, French, Spanish with local Assyrians, Armenians and Catholics.  The church is visited by many Christian tourists, especially Catholics. In addition, the church attracts many visitors by being influenced by the density of Istiklal Street in Beyoglu. The Saint Antoine Church has 6 floors and 2 apartments connected to each other by a passage. These are St. Antoine Apartments and are the first reinforced concrete structures of Istiklal Street. It has the distinction of being the religious structure in which the details of neogothic architectural style can be observed in Istanbul. 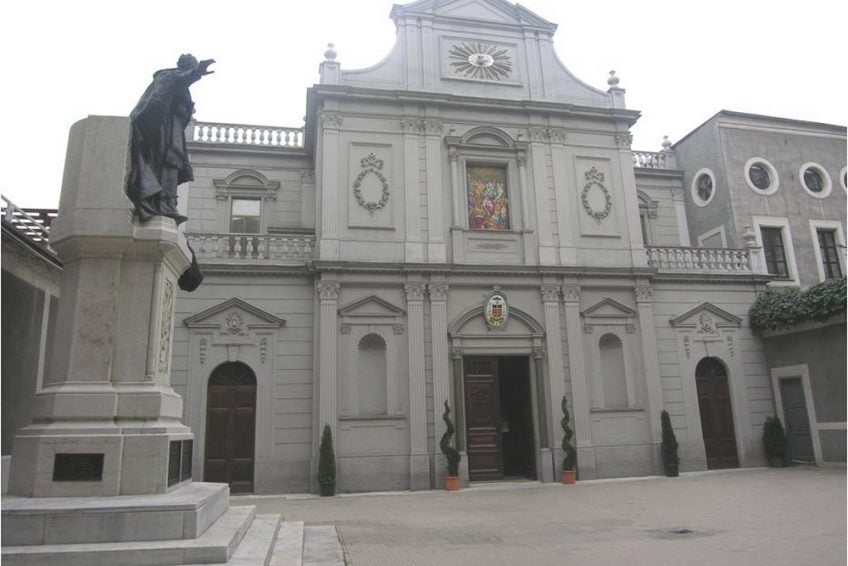 In Harbiye, it is in the courtyard of the Notre Dame de Sion French High School which is the most important building of the Latin community in Istanbul. In the same courtyard, there is also a monument dedicated to Pope Benedict XV. Saint Esprit Basilica, which was built in the middle of the 19th century with its characteristics similar to the baroque style, is the central cathedral of the Latin Catholic Episcopal in Istanbul. With these qualities, it stands out among the other Catholic churches as being visited by pope, who visit Turkey and conduct a religious ceremony here. The Church, also known as the 'Cathedral of the Holy Spirit', was built in a typical baroque style. 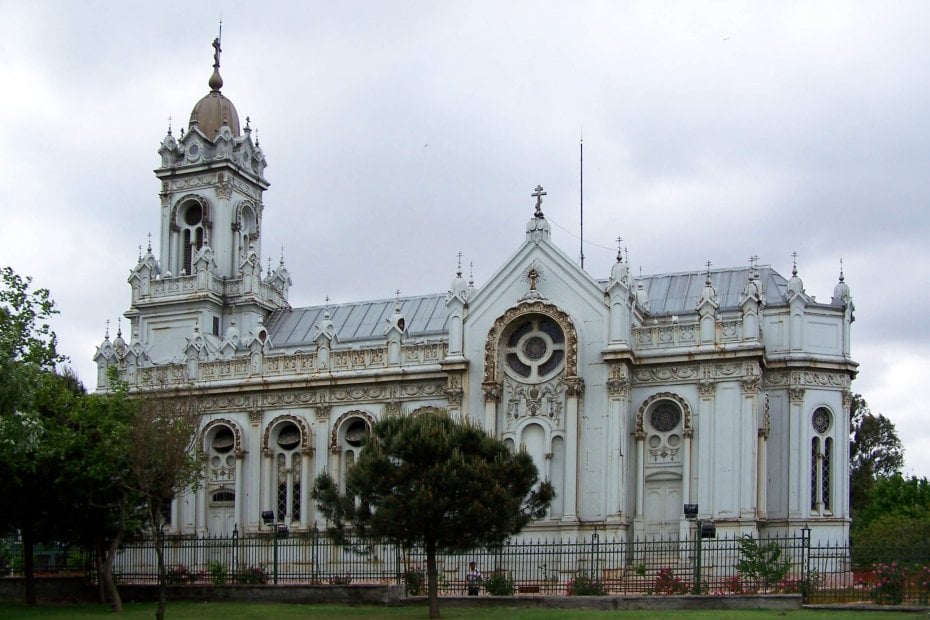 The Iron Church (Sveti Stefan Church) in Balat, which was built on the shores of the Golden Horn, is completely made of iron. Since the location of the church is very close to the sea, iron is preferred instead of concrete. The church weighs 500 tons and is brought to Istanbul via the Danube and the Black Sea. When the church was opened in 1898, it was one of the three iron churches in the world. Among the iron churches in Argentina, Austria and Turkey, while the ones in Argentina and Austria disappeared, the iron church in Balat, Turkey, could stand still.