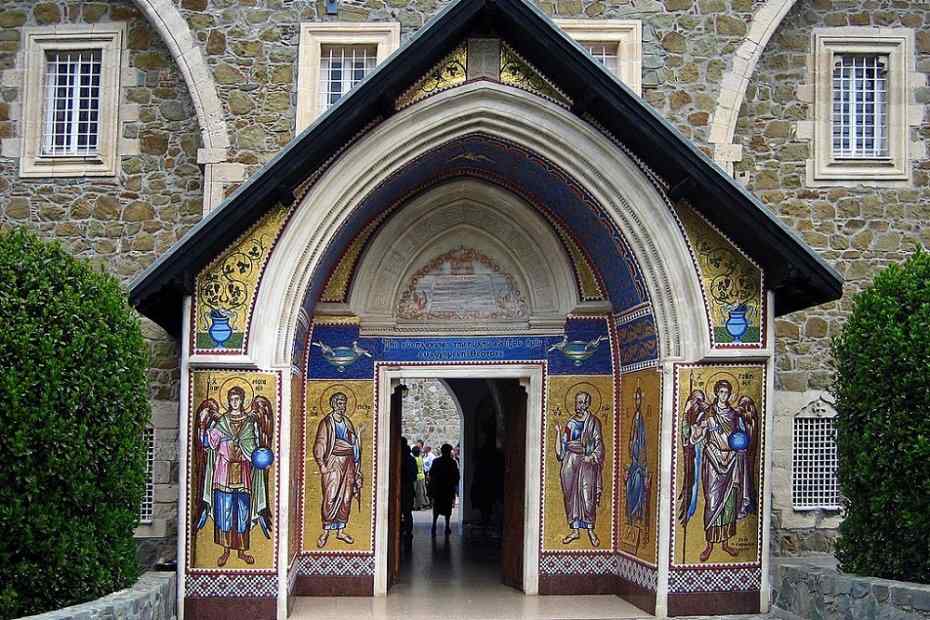 Perched at 1,318 meters in the biggest mountain range in Cyprus, Troodos Mountains, Kykkos Monastery (Panagia tou Kykkou) is not only Cyprus’ most significant and famous monastery but also one of its most magnificent tourist attractions. The original Byzantine monastery was founded in the late 11th-century, but today most of the structures date back to the 19th century, while a fascinating collection of icons, manuscripts and antiquities are housed in the Monastery Museum.

The richly decorated monastery offers a unique experience for its visitors with its marble floors, colorful murals and frescoes, but its most notable asset is an icon of the Virgin Mary, one of three surviving icons painted by the Apostle Luke, enshrined in an ornate tortoiseshell and mother-of-pearl case and never uncovered.

A Christian community in Egypt has initially kept the icon before being transferred to Constantinople. Later on, it was delivered to Cyprus with patronage provided by Emperor Alexios Komnenos (1081–1118).

The Legend of the Monastery’s Construction

According to the legend, the Byzantine Governor, Manuel Boutoumites was lost in the forest while hunting one day. After wandering around for some time, he eventually came across an old hermit, Isaiah, who lived in a cave on the Kykkos Mountain. After being refused by the hermit, who was done with earthly matters, Manuel became angry and mistreated the hermit.

Shortly after returning to Nicosia, Manuel fell ill and, remembering how he’d treated the hermit, he asked God to cure him so that he could go and personally ask Isaiah for forgiveness. God revealed that everything had been divine will and that Boutoumites should collect the icon from the emperor of the imperial palace in Constantinople and deliver it to Cyprus. This was no easy task, but by divine intervention, the emperor’s daughter had also fallen ill with the same sickness that had struck Boutoumites. So he used this opportunity to see the emperor and tell him that she would be cured if the icon was sent to Cyprus.

The emperor, seeing that he had no other option, agreed and his daughter became well instantly. However, the emperor did not want to leave the icon of the Virgin. He called a first-class painter and ordered him to paint an exact copy of the icon with the aim of sending this one to Cyprus. In the evening, the Mother of God appeared in a dream of the emperor’s and told him that her wish was for her icon to be sent to Cyprus and the copy to be kept by the emperor.

The icon is never looked at, and its top half remains hidden behind a protective covering as it is said that whoever looks at it will be blinded. The last person to have seen the icon is the Pope and Patriarch of Alexandria Gerasimos, in 1669. The icon is rarely uncovered, although this happens on occasion.

Best Restaurants in New York
Startup Ecosystem in Canada
Is It a Good Time to Invest in Property?