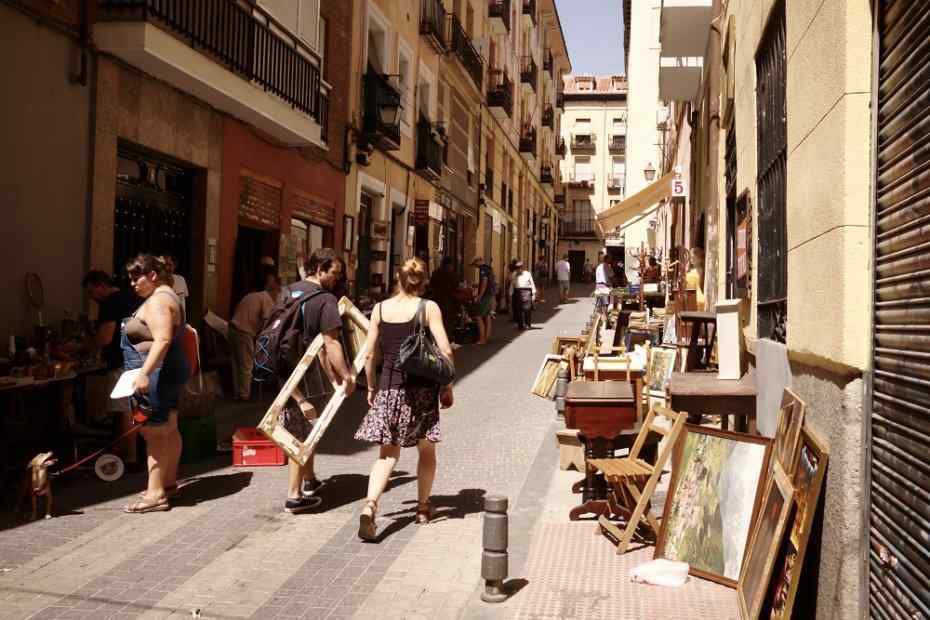 Attracting thousands of people every Sunday each week with more than 750 stalls it has to provide every need and want for its visitors, El Rastro is Madrid’s most popular open-air flea market. Sundays have a special value for the people of both Madrid and visitors of El Rastro, as it means a day of grand sales and trips among countless stalls that provide items from a variety of choices. As it could be said that El Rastro is just an open-air flea market, it is more than just that. Over the years, El Rastro essentially became an excuse for the people of Madrid and Spain to gather as a whole, celebrating anything as they buy and sell different things from each other. Originally, El Rastro was located near a slaughterhouse, and its products were sold in this street. Evolving and growing throughout history, El Rastro is a market where many cultures and people conjoin to provide each other with different things they need.

El Rastro translates as “the trail”, which corresponds to the old slaughterhouse in which a huge portion of Madrid’s needs were fulfilled. In 1497, this slaughterhouse was the first official one in Madrid, increasing the attention and value of such a place through time.

As Madrid continued to grow and become a city rather than just a small village, its requirements for necessities, such as meat, increased, enlarging the power and size of this slaughterhouse. As slaughterhouses increased the number of cattle slaughtered, it received the attention of countless tanneries that wish to take advantage of such a situation. So, hides of cattle from the slaughterhouse were transported to these tanneries, leaving a trail of blood behind. El Rastro quickly received fame with its unique establishment chain and high-quality cattle meat and leather hide during the 18th century. Today, El Rastro is a grand market where countless secondhand clothes, technological items, antiques, groceries, meat products, materials, cultural items, and much more are sold. Today, El Rastro is among the most important and popular markets in the world.

El Rastro takes place every Sunday, including various special holidays and celebrations as well. Located in a neighborhood called “La Latina”, it's fairly easy to reach El Rastro, as there are many bus lines and metro stops in different parts of this market. As it has a grand size, you can either get off at La Latina Station to explore through El Rastro starting from the top, or from the Puerta de Toledo Station to start from the bottom. Each way, it's guaranteed for you to find something that you will have the desire to buy. Open from 9 am to 3 pm, El Rastro gets as busy as it could around midnight, so make sure to arrange your time, so you don’t find yourself alone with the leftovers. As stalls garnish El Rastro, there are many other renowned establishments along the road open through the week, selling a great variety of products as well.

With its historic value and appealing charm, El Rastro sure is a market that you should either pay a visit to or spare a day for. Giving the possibility of experiencing the values of Spanish culture, it sure is a place to visit.

Best Shopping Street in the World: 5th Avenue
Highways in Istanbul
Where to Invest in Vacation Rental Property?