In all of the exhibition halls, models of works made by Islamic scientists meet art lovers. A copy of the world map drawn by Al-Idrisi based on the map of the Caliph al-Me and the Museum of Turkish and Islamic Art for unique works of the 9th and 16th centuries, It is possible to reach.

The Museum of Turkish and Islamic Arts can be gone with the Kabataş-Bağcılar tram line in Istanbul and It is in all its splendor just across the Blue Mosque in Istanbul.

This section, which has made the museum known as a ''Carpet Museum'' for many years, constitutes the richest collection of carpet art in the world. In this section, which has a special importance in the museum, there are valuable pieces. These rare Seljuk carpets, 15th century prayer rugs and animal figured carpets, geometric patterns produced in Anatolia between the 15-17th centuries can be seen here. This museum, which has a special value by those who want to work on Turkish and Islamic historical carpet art, is enriched with Iranian and Caucasian carpets, famous Usak and palace carpet samples. 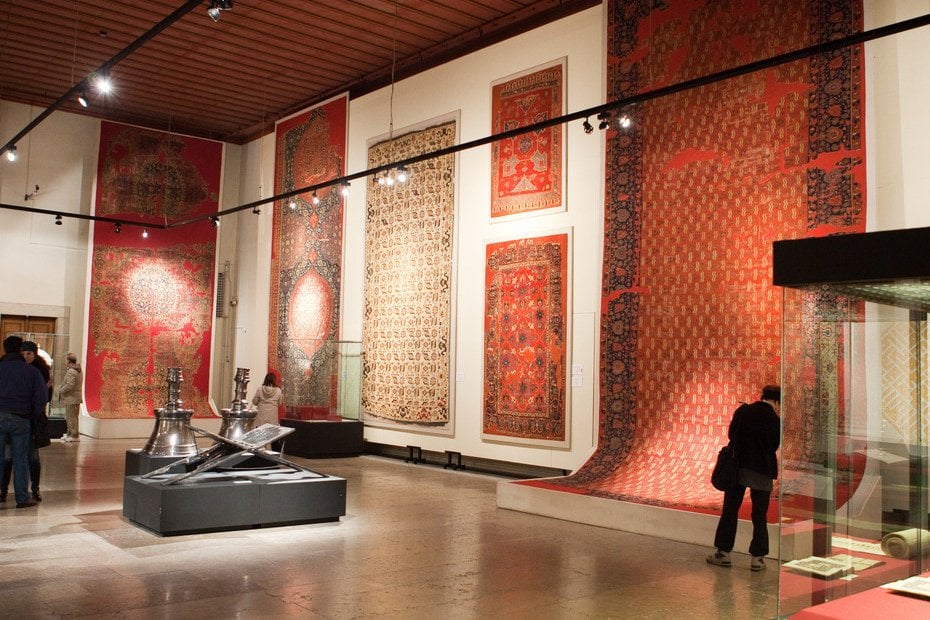 It is known that the Korans, the most important parts of the Turkish and Islamic Works Museum's writing collection, were taken from the regions where Islam spread. In the museum dating back to the 7th century and 20th century, rare collections such as the Umayyad, Abbasid, Egyptian and Syrian Tulunogullari, Fatimid, Eyyubi, Mamluk, Mongol, Turkmen, Seljuk, Timurid, Safavid, Qajar and Anatolian Principalities and Ottoman calligraphy samples are included.

In addition to the manuscripts in the museum, there are many books written on various subjects, some of which are illustrated. These books attract attention with their subjects, writing styles and volumes. Among the most popular works of the Manuscripts Department of the Museum of Turkish and Islamic Arts; The rescripts, bearing the tughra of the Ottoman sultans, Turkish and Iranian miniature manuscripts, warrants, tughras and ''divan'' each of which is a work of art.

The most important pieces of the Wood Works section are the unique examples of wood art from the 9th and 10th century Anatolian Seljuks and seigniory period. In addition, this section provides the opportunity for the visitors to see one of the most interesting pieces of this rich collection, the pearl, ivory, vintage embroidered wooden artifacts of the Ottoman period, the Quran fascile, the drawers and unique examples of the art of inlaid.

The Museum of Turkish and Islamic Arts contains stone, artifacts and motifs from the Umayyad, Seljuk, Abbasid, Mamluk, and Ottoman periods. Legendary fairy tale creatures sphenks, griphon and dragons, hunting scenes are engraved, gravestones, cufic works continue to ginger up the museum in this section. In addition, inscriptions written in different styles that add importance to this section are also worth seeing.

In this section, there are ceramic artifacts found during excavations between 1908-14. The most important collections of the Ceramics and Glass Department include works from Samarra, Raqqa, Tel Aleppo, Kashan. Another important collection in the section belongs to the Anatolian Seljuk and Principalities Period. Pieces of this collection include mosaic, mihrab and wall tile samples and plaster decorations of Konya Kılıçaslan Palace. Examples of Ottoman tile and ceramic art include Kütahya and Çanakkale ceramics. In the glass collection, 9th century Islamic glass art, 15th century Mamluk oil lamps and glass art examples of the Ottoman period are exhibited.

The Museum of Turkish and Islamic Arts has a collection of works of art belonging to the Great Seljuk Empire like mortar, censer, ewer, mirror, dirhams, door knobs of Cizre Ulu Mosque. In addition, 14th century candlesticks covered with horoscope and planetary symbols, one of the most important examples of Islamic mining art, are among the most important and rare collection products of this section.

Ethnographic pieces are exhibited in the Ibrahim Pasha Palace of the Museum of Turkish and Islamic Arts. These rare pieces are the youngest part of the museum which are collected for many years. Here, carpet-rug looms collected from many regions of Anatolia, carpet weaving and processing art samples, household items, handicrafts, weaving, wool dyeing techniques, local riches costumes, handicraft devices and nomadic tents are meeting art lovers in this place.

What Are the Costs for Property Investment in Canada?
Commercials with the Best Location in the Black Sea Region
Istanbul Canal Project