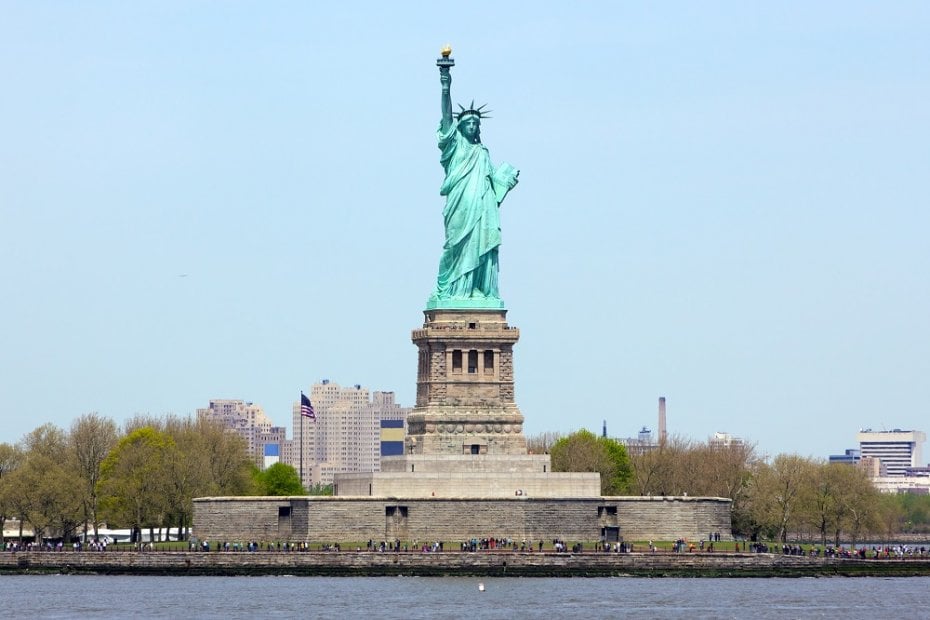 The Statue of Liberty, rising splendidly in the sky of New York, fascinates people with its historical meaning and aesthetic beauty. The statue was unveiled on Liberty Island in New York on October 28, 1886, with a spectacular ceremony.

Characteristics of the Statue of Liberty

The statue, made of copper, was presented to the United States by France for its 100th anniversary. In her raised right hand, the statue holds a torch which represents the path to freedom. In her left hand, she clutches a tablet bearing the date of the Declaration of Independence (July 4, 1776). The 7 pointed ends of the crown on the head symbolize 7 continents or 7 seas. The height of the statue is 46 meters, with a pedestal of 93 meters. Visitors can climb a 168-step ladder up to the torch from inside the statue. The height of the statue’s right hand holding a torch is 13 meters, and 15 people can walk around in the corridor around the torch. The width of the statue’s head is 2 meters, and its height is 5 meters with its crown.

History of the Statue of Liberty

The statue was modeled after Isabelle Eugenie Boyer, widow of Isaac Singer, founder of Singer sewing machines. The Statue of Liberty was initially planned to be placed at the entrance of the Port Said on the Suez Canal in the 1860s, as required by the treaty signed by Said Pasha, the Khedive of Egypt under the Ottoman Empire for the construction of the Suez Canal. Since Ismail Pasha thought that a statue of this size would not be suitable for a Muslim country at all, he told Lesseps, who carried out the canal project, not to bring this Statue of Liberty. The statue was then moved to a warehouse in Paris. Twenty years later, in 1885, when the French government wanted to build a large statue as an indication of their good relations with the USA, they went to the same sculptor Frederic Auguste Bartholdi. The statue was taken out of the warehouse. The sculptor Bartholdi and Gustave Eiffel (the engineer of the Eiffel tower) worked together to renovate the statue with some changes and place it on Liberty Island on the coast of New York.

Bartholdi called the statue Freedom That Enlightens the World. The Americans changed its name so that it became known as the Statue of Liberty. When the statue was first built, it had a dark color. In time, as a result of the oxidation of the copper plates, it corroded and turned green. You have to climb 354 steps to get to the crown of the statue. There is no elevator, but it is worth climbing these steps to witness the beauty of this magnificent structure more closely.