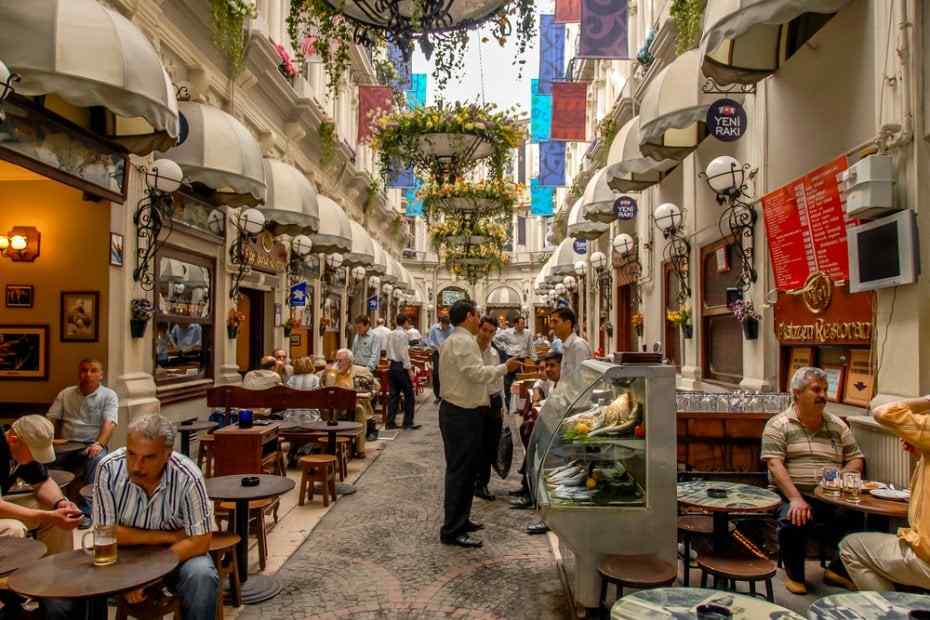 The, which host the most valuable shops of the time, embrace cinema and theater venues in Istanbul's cultural life, offer small worlds by themselves, inherit from the history of Istanbul and assume new functions in the city life.

Arcades in Istanbul first appeared in the 18th century and became one of the first addresses visited by those who want to have a hot tea and have friendly chat. Through the narrow gates of Istanbul's arcades that have managed to stand for centuries, we trace our passages, which are frequented by young people and tourists, by drinking tea in small cafes and shops, in bookstores, music stores, gift shops and antique stores. …

Walter Benjamin, a German literary critic, thinker, cultural historian and aesthetic theorist, mentions the arcades that come to the forefront with their architectural styles, not only as shopping centers of the city, but also the places where intellectual conversations are held and cultural encounters are held. “arcades, a new invention of industrial luxury, are marble-covered walkways that pass through the building masses, covered with glass; the owners of the building have reached a compromise among themselves in this type of speculation. The most elegant shops are located on either side of these arcades that take the light from above; so this kind of place, is a city on its own, and means a small world.”

Walter Benjamin's description of these places in the world in the 18th century gradually became widespread, the face of the Ottoman Empire facing the West, Istanbul, takes its share from it. Affected by this architectural trend, Istanbul's Istiklal Street becomes a paradise of arcades. 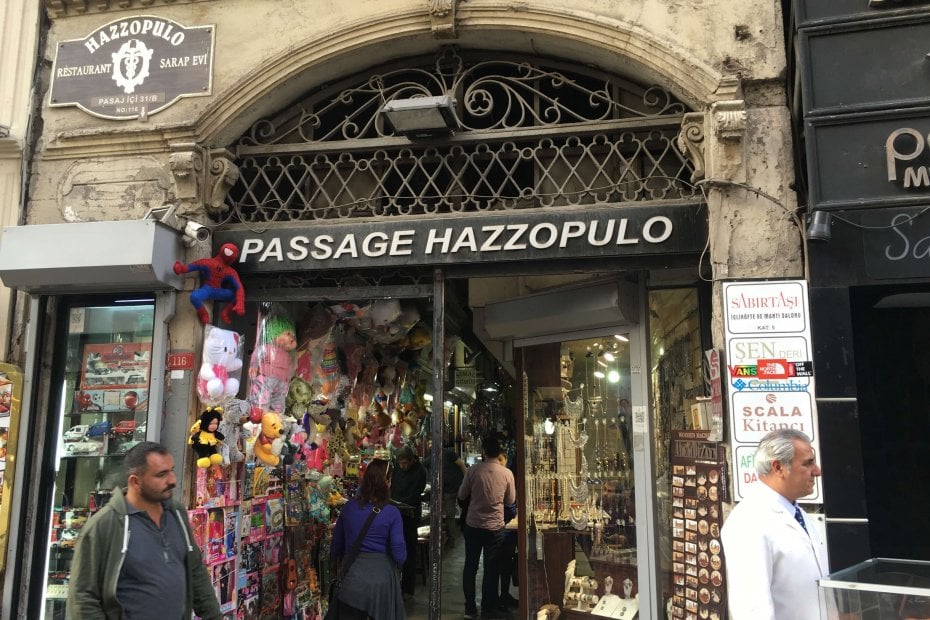 The Hazzopulo arcade on Istiklal Street was the headline of the La Turquie newspaper of the period, with the information that all the shops were rented despite the high rental prices. In the period when it was opened, the arcade where the Salle Adam store was popular and instrumental performances were done, also hosted İbret Newspaper, which was published by Namık Kemal, one of the pioneers of Turkish nationalism, journalist, statesman, famous writer and poet.  Therefore, Hazzopulo arcade, which is known as a long-term inconvenient place, stands out as a place where literary interviews are made nowadays, silver accessories on right and left sides, colored stone designs on each side and conversations with backgammon sounds are done. 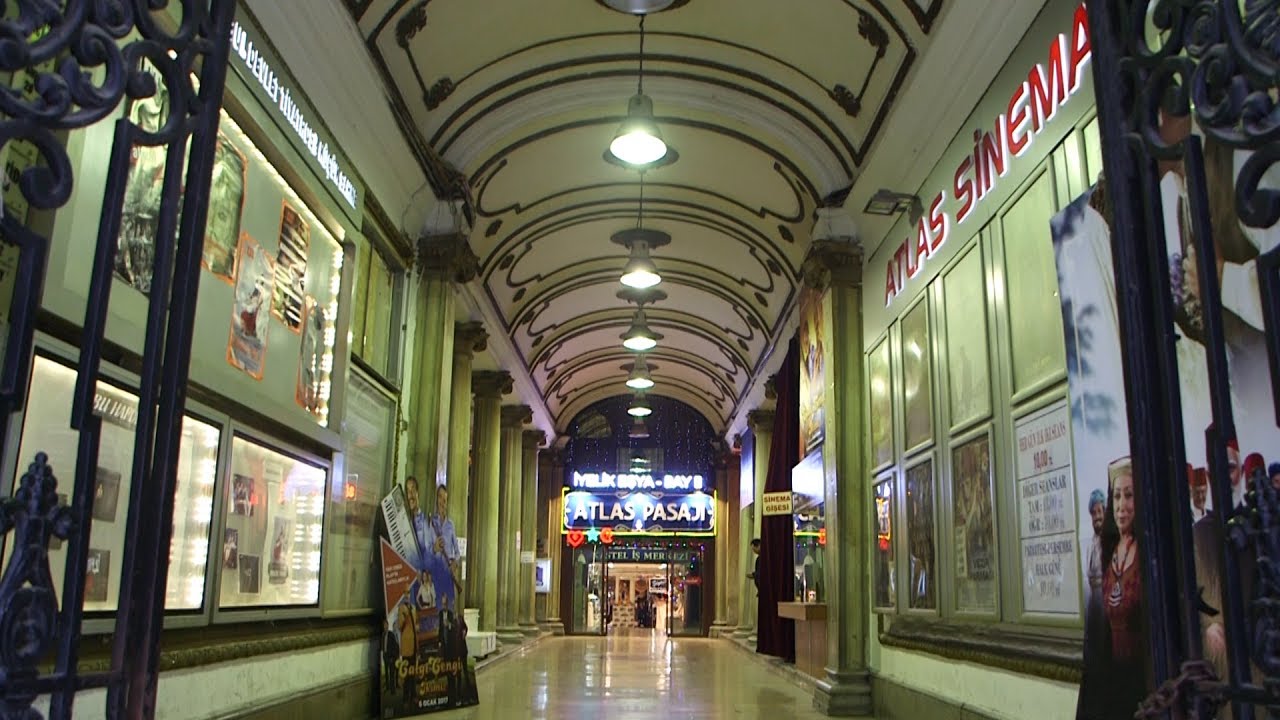 One of the most famous Istanbul arcades is undoubtedly the Atlas arcades.  Founded in 1870, the passage was built from stone and cast iron to be used as a home during the winter months and then it became one of the entertainment and art centers of cultural life. In 1948, with a capacity of 1860 people and 35 lodges, the arcade hosting the Atlas Cinema, which is one of the biggest cinemas of Beyoğlu, was opened in 1951 with the name of Küçük Sahne Theater. Nowadays, it is home to Sefahathane, one of the meeting places of art lovers at the entrance of the passage. 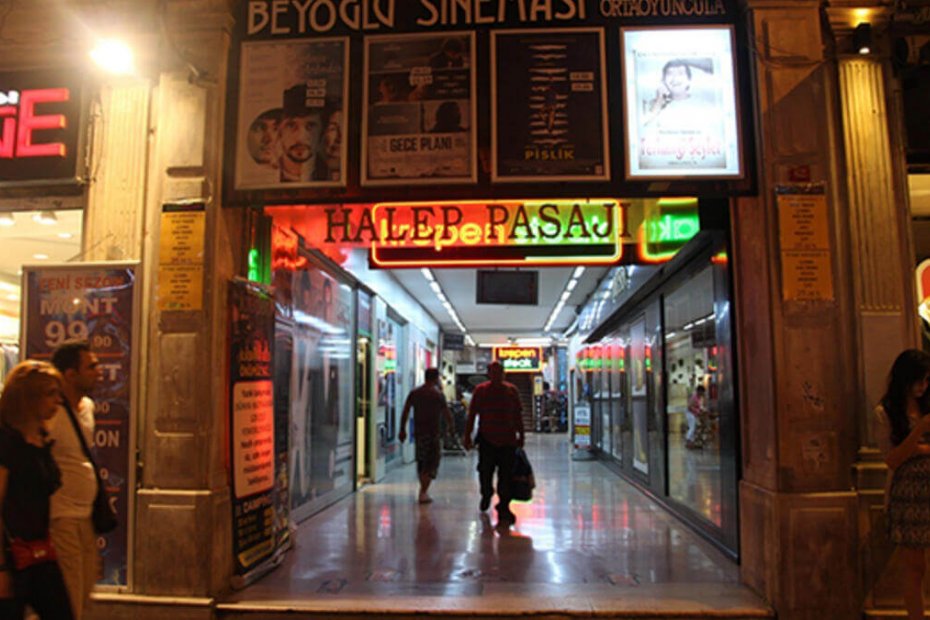 Built in 1885 by M. Hacar, one of the merchants from Aleppo, the arcade hosts Pera Circus, which featured animal shows in its early years. At the beginning of the 1900s, all passages were damaged by fire from İstiklal street, while the Aleppo passage was damaged and The circus was restored and the theater building was built in its place. The name of the theater in the early years is the French Theater. Since 1942, at the entrance of the building that hosted musicians, cinema and theater artists, there is still the inscription “1885 Aleppo Bazaar’’ one written in Latin and the other in Arabic letters. 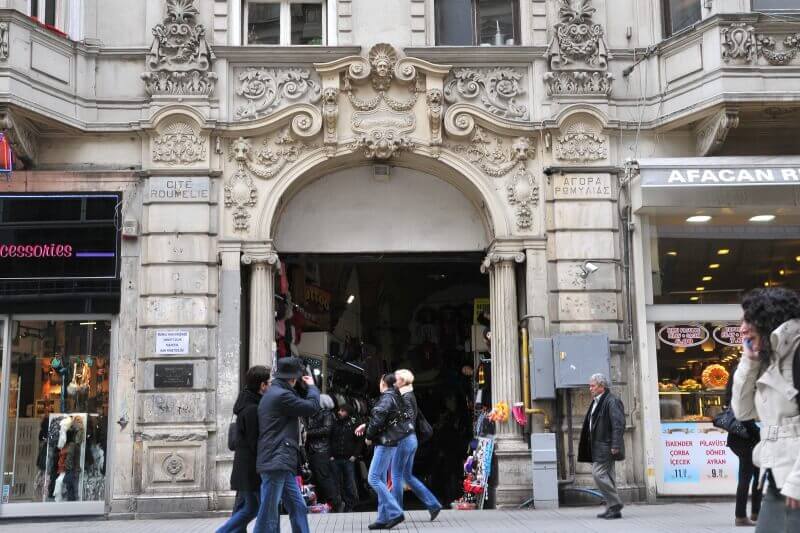 Three of the arcades in the Istiklal Street, was built by Sarıca Ragıp Pasha who was the the shrine of Abdülhamit II. (the Ottoman sultan). In order to invest in real estate in Istanbul, Pasha built the Rumeli Arcade, the Anatolian Arcade and the African Arcade in Beyoğlu, where the Levantines live, and dedicated it to the regions of the Ottoman Empire. The Anatolian and Rumeli arcades are still in use today. Designed in the form of an Italian-style five-storey masonry structure, Anadolu Arcade has 17 shops on its floor and 20 houses on its upper floors, while the passage is located on an area of 830 m2. One of the indispensable parts of the actors, the actors Theater Coffee is still in the building. At the end of the Rumeli, Öğüt and Mayacı streets, where the bars are located, welcome you. Rumeli Arcade, where Turkish Communist Party is located and the members frequently visit it, and it is also a popular destination for architecture enthusiasts and those who want to take photographs. 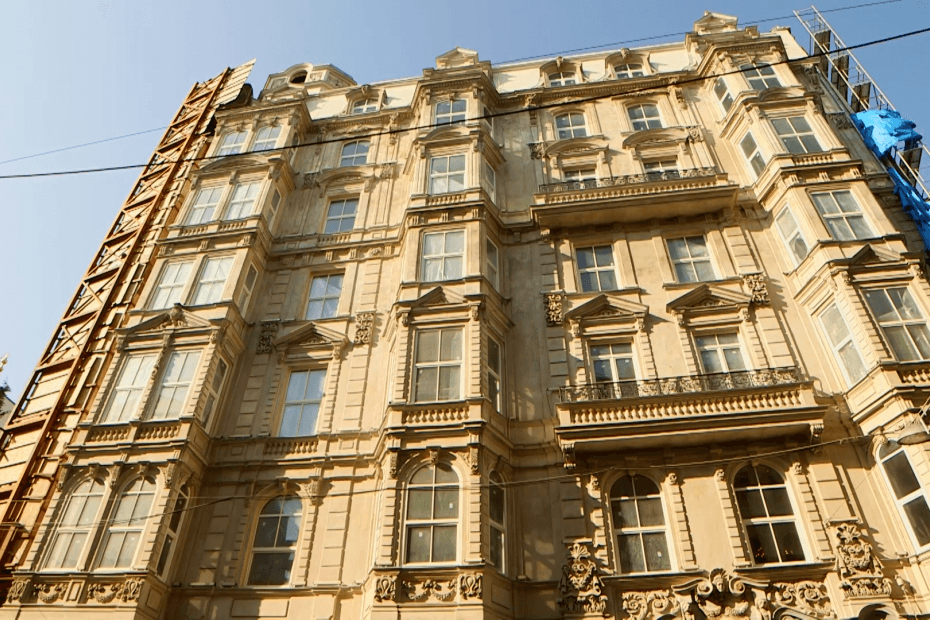 This arcade is not located on Istiklal Street, the passage act as a bridge between the Küçükparmakkapı and Büyükparmarkkapı and continues to be restored. Previously used for residential purposes, the passage was once known to be home to expensive fabric shops of the period. 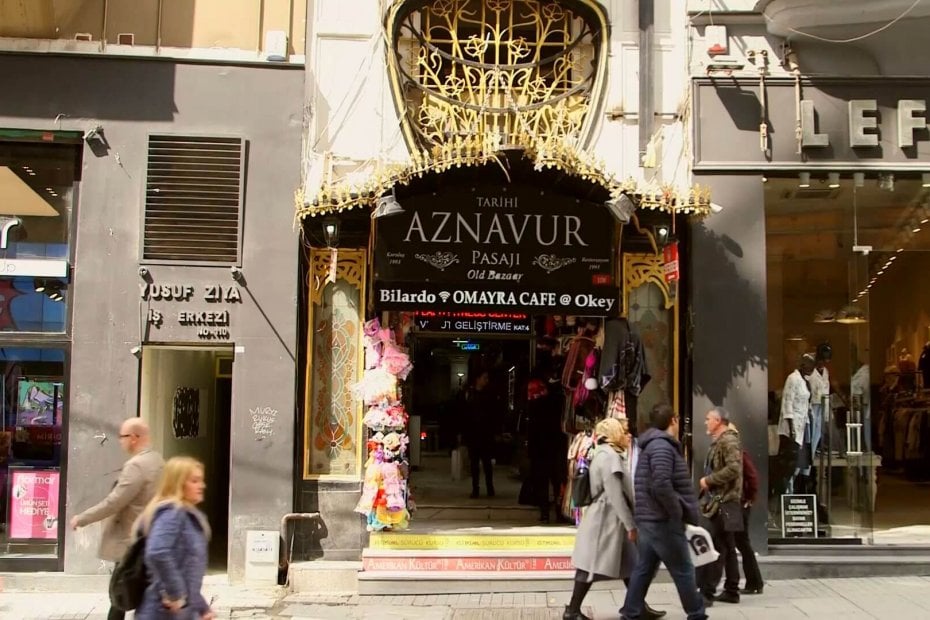 Aznavur Arcade, where shops’ fair values have reached the highest in Turkey, built in the early 1900s. The arcade, which has been restored by keeping its originality in 1994, is considered one of the most popular arcades of İstiklal Street. The passage, which includes a small tea garden where you can sit and relax if you are tired of shopping when you go up to the upper floor, is one of the centers where the accessories decorated with traditional Turkish motifs are purchased intensively by tourists. 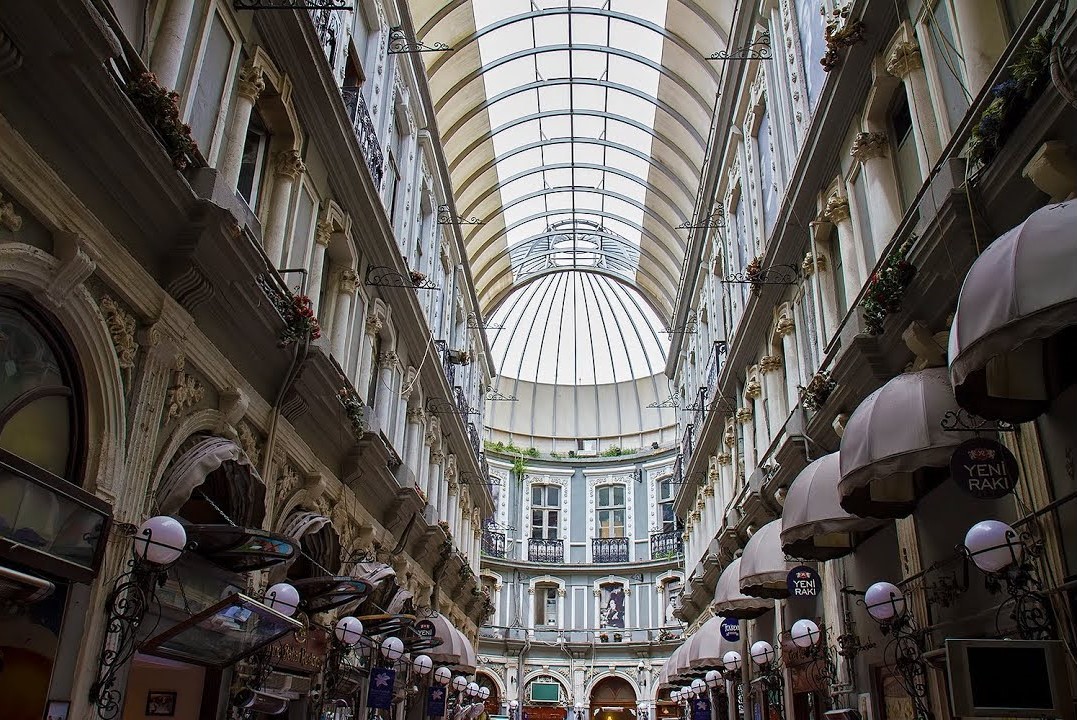 Flower Arcade, which was called Cite de Pera in the period it was built, is known as the most well-known arcade among the passages established in the 18th century in Istanbul by stepping forward with its architecture.  The place, which was restored after the fire and included restaurants, was used as a residential area in the past. Although the real face of the arcade is not so much visible because of the restaurants, when it was opened in 1876, it had 20 shops on the ground floor reflecting luxurious Parisian architecture, and 18 apartments on three floors. The arcade, which is one of the first preferred places for foreigners residing in Istanbul, went through its most brilliant period during the Ottoman Empire. Nowadays, the passage, which has become a place where people of all ages and thoughts go and enjoy themselves, is waiting for its new visitors with its middle dome which leaves everyone fascinated. 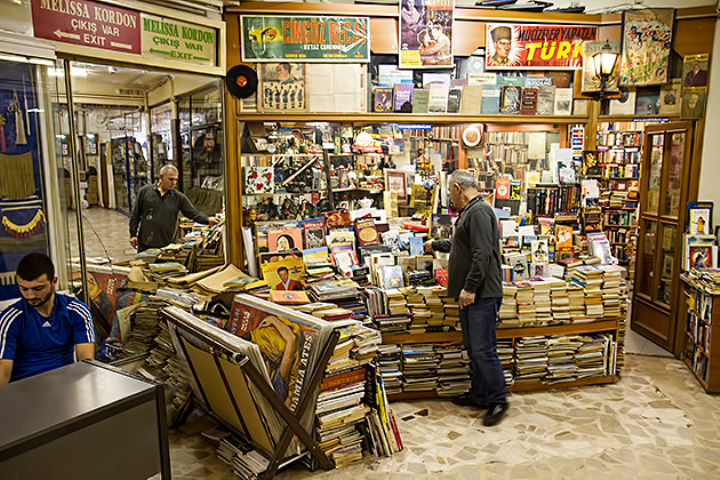 The arcade, which stands out with its two-storey and twisty architecture, now has antiquarian shops with old book scents.  The passage consisting of books and magazines of all kinds and languages, from comic books to classics, from literary works to art books, is considered one of the cultural spots of Istanbul.

In accordance with the spirit of the period in Istanbul, the arcades that connects two streets, were considered one of Turkey's first shopping centers. These places, which are warmer and more intimate than the shopping malls we know today, are not limited to those mentioned. Alhamra Arcade, Terkos Arcade, Beyoğlu Arcade, Syria Arcade, Mirrored Arcade, Tunnel Arcade, Marquise Arcade, Tokatlıyan Arcade, National Reassurance Arcade, Akmar Arcade, Doğubank Arcade, Bahariye Caucasus Arcade are also available.

What to Consider When Investing in Property?
How to Calculate Yield on Investment Property?
Tallest Buildings in Spain