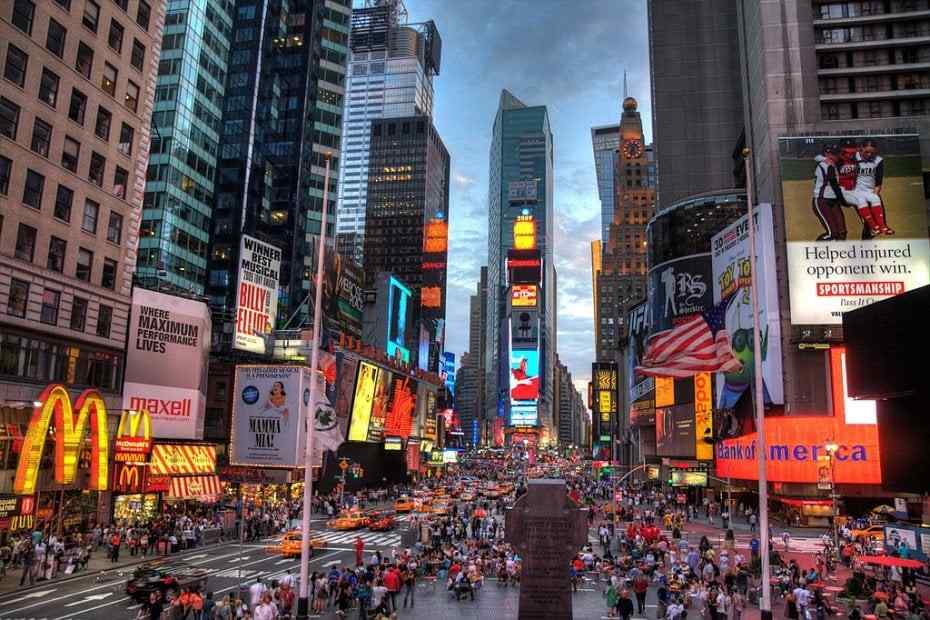 One of New York’s landmarks, the stunning Times Square is the world’s most popular square. It is an important tourist center, commercial crossroad, and entertainment center in Midtown Manhattan. The square in the heart of New York is the most vibrant and lively street in the country. It is at the intersection of Seventh Avenue and Broadway. There are luxury hotels, restaurants, movie studios, and offices here.

Tourists have a special interest in Times Square. It has always been the first stop for those who go to Manhattan. Colorfully illuminated billboards have become the hallmark of this square. Every year, thousands of people flock here to begin the New Year in Times Square. The square overflows with great enthusiasm on New Year’s Eve.

The first name of the square was Longacre Square. It took its current name after the New York Times headquarters moved here. The 300-year-old historical square continued to serve many functions, especially as an entertainment and tourism center, which hosts an average of 360,000 visitors per day. It has been a famous horse-drawn carriage rental center for more than a hundred years. As the city continued to grow in the 19th century, more businesses emerged. The Lower Manhattan area continued to industrialize as major shipping companies with steel and coal mining established. Longacre Square grew with electricity and became a vibrant place. Theatres and cafes were built along Broadway in the early 1900s. In the late 1980s, the street became a crime-ridden place. In the mid-1990s, a mass urban transformation project led by Mayor Giuliani was built in this area. As of the 20th century, the square started to take its current appearance.

Today, the most extensive subway stop in New York is in Times Square. 11 different metro lines pass through this stop. Some of the roads here are closed to vehicle traffic and are only open to pedestrians. The square has been declared as a smoke-free area with the latest changes.

You can see the stores of the world’s most famous brands along the street. Hard Rock Cafe, Madame Tussauds Museum, Virgin Megastore, and MTV Times Square Studio are the main tourist attractions of this fantastic place.

Times Square has very important spots, each of which has a reputation. Among them, Broadway is undoubtedly the best known. This famous area is like a theatre and musical paradise. On Broadway, you can have the chance to watch Hollywood stars on stage.