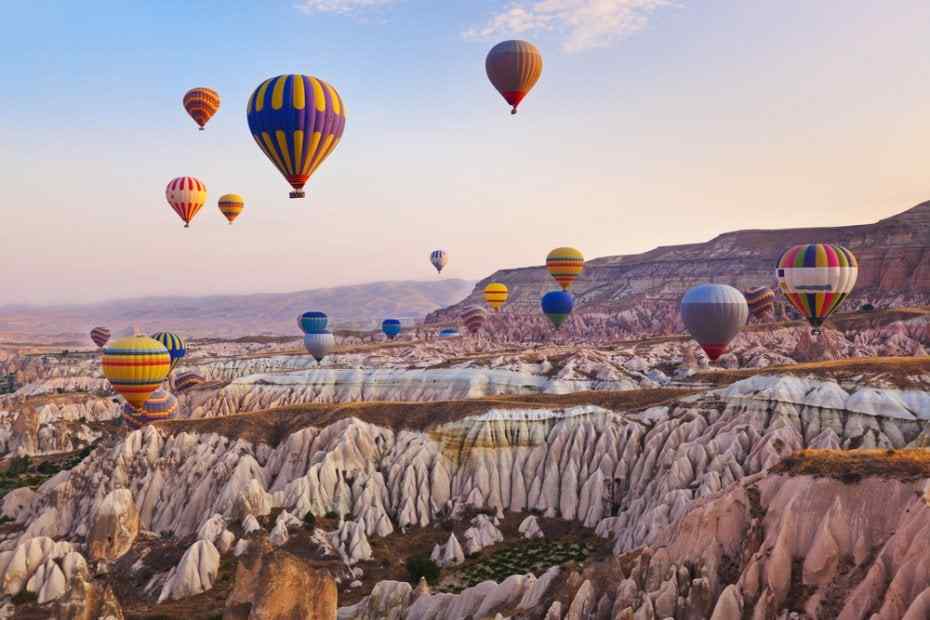 With fairy chimneys, balloon rides and famous underground cities, welcoming thousands of local and foreign tourists every year, Turkey's historical city Kapodokya, awaits the visitors of this year. The place attracts a great deal of attention from foreign tourists and has recently been a plot in various series and films, attracting and convincing you to travel in history.

The formation of fairy chimneys has a story about 60 million years ago. The volcanic mountains Erciyes and Hasan Mountain, which were active at that time, formed different layers in the region with the lava they spray. During this active period, the inner part of Anatolia consists of these lava layers and comes to our day. As the result of erosion of tuff layers of different hardness along with volcanoes and climate change, wind and water currents, these wonderful formations form the valleys of the Kızılırmak River and the branches of the Melendiz River, forming the crushing of the rocks. So nature, putting forth a work of art, adds one more wonder to Turkey which houses the world's a great many of it. The first people who saw the Fairy Chimneys believed that they were sacred and mysterious and called these shapes Fairy Chimneys which they had never seen.

When the soil cover of Nevşehir is examined, it is seen that the inner structures of the rocks composed of natural tuff are soft. Therefore, they are easy to shape and erode. This soft structure allows people to carve the rocks and build houses, commercial places and religious places. When you visit the region, you see houses carved out of rocks and cities made of these houses in many places.

Because Anatolia has been a transitional geography for all tribes for centuries, people start building their houses by carving rocks into the underworld for security reasons. Since they can go down seven layers of earth, we understand that they are knowledgeable about it. These cities, which are designed with many structures such as ventilation system, water system and waste evacuation of the house that is 7 floors below the ground, are designed to be closed to the entrance from above if the inhabitants do not allow it. Constructed in such a way that it cannot be entered unless allowed from below, the structures gradually expanded downwards and sideways. The caves, which stretched for miles, confused the enemy's mind in the event of danger, and even if an army was encountered, as narrow corridors only allowed one person to pass, it provided security that the host could easily cope with because of its narrow structure. 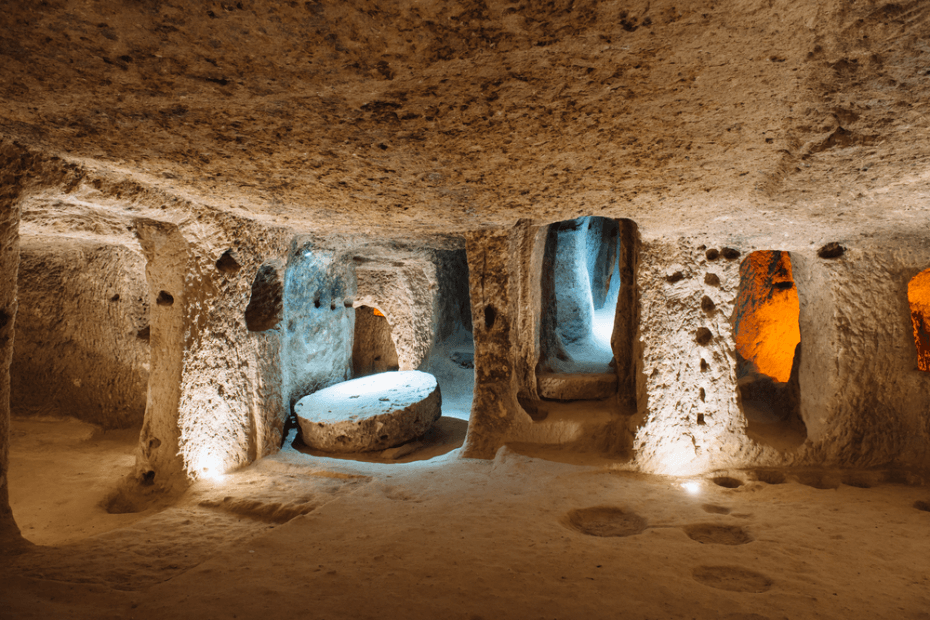 After passing through the long corridors, the buildings with hundreds of rooms are reached. In order to reach the rooms, firstly the sliding stones of 3 meters in diameter must be dragged through the cave doors. In these structures designed to prevent interference from outside, people can live for long periods without needing anything from outside. An underground city has more or less the following structures: water well, kitchen room, ventilation ducts, toilet, barn, kitchen cellar, chapel.

The Heart of Mining and trade

We can see that mining is very developed in the region due to the archaeologists' findings from the excavations. When trade was equivalent to mining before Christ, 4,000 years ago, the Assyrians started the trade organization here. We know that the first commercial tablet and the first commercial writing were found here during the excavations carried out in Kültepe, Kayseri. The ancient geography of Anatolia was home to a rich geography where copper, silver and gold were quite a lot. 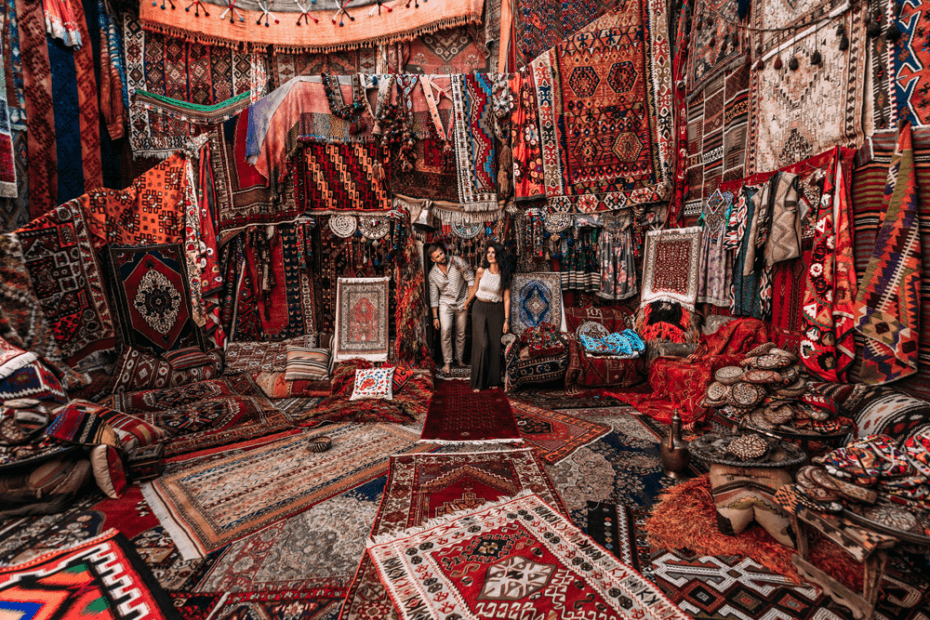 It is said by the archaeologists today that the people of the period who developed themselves in trade products instead of making guns, because of the very small amount of bronze mine, had to live in underground cities in order to protect their goods and themselves.

When the Roman Empire was dominant in the Middle East, Christians fleeing oppression and persecution came to the valleys of Soğanlı, Ihlara and Göreme to protect and hide themselves. From past, when you visit Cappadocia you will see the remaining of churches to the present day made by Christians, who carved the rocks and established safe underground cities of the mentioned structure and made one of the most suitable places to hide. 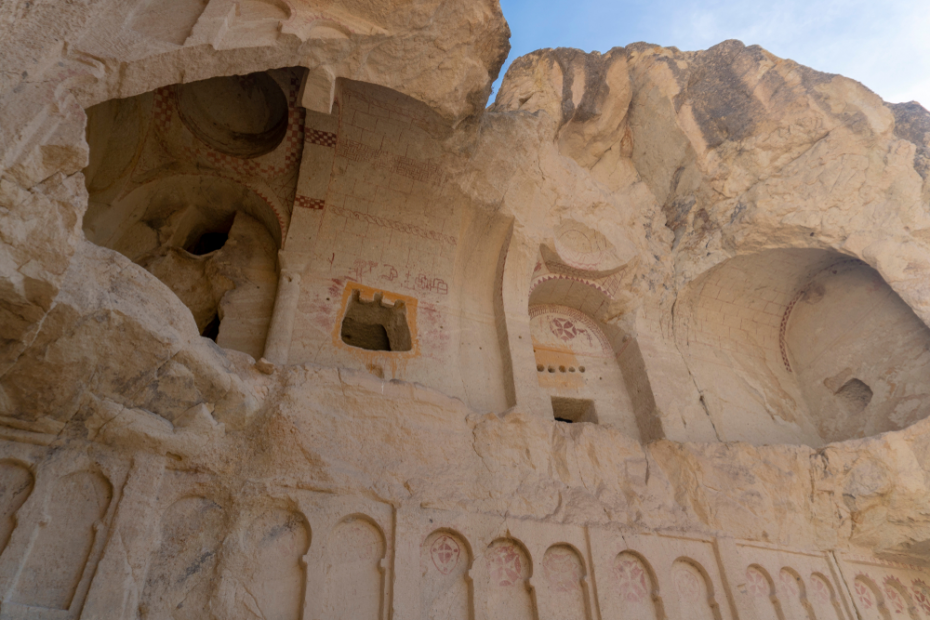 The paintings and motifs of Christianity on the walls of the churches made of carved rocks have been preserved as if they were works of art. When you visit, you can see that the eyes of the people in the motifs and pictures there are carved. The reason for this is to prevent others from seeing Christians after they leave the region.

After the Battle of Manzikert, which opened the gates of Anatolia to the Turks in the 11th century, the Turks began to dominate in the region and the Cappadocia region became a center where many religions and cultures lived together. Since the region is a transit point for all of Anatolia and is located on the caravan trade route, the Seljuks built roads here. The caravanserais built in the region on a day long distance are thought to be safe for the people living in the region. 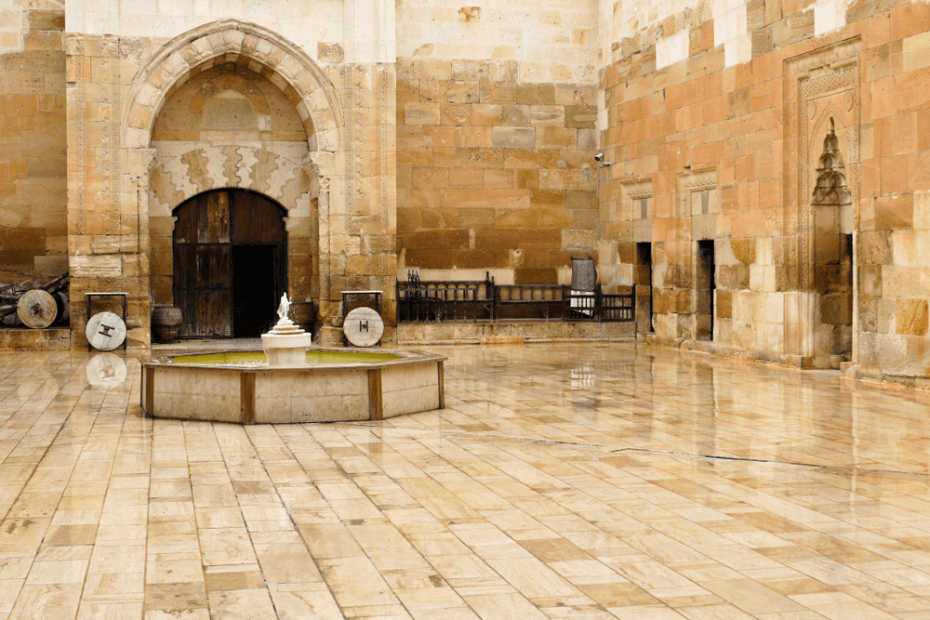 Pedestal boulder in Gülşehir region is a very different formation from fairy chimneys in terms of structure and shape. Apart from the pedestal boulder, which is one of the regions visited by tourists, there is St. Jean Church which is very popular among foreign tourists. This church differs from the other churches in the region as it has two floors. One of the outstanding features of St. Jean Church is that the motifs on the ceiling of the church have been preserved until today and that your voice will be heard equally from all sides of the church in the divine reading part of the church as it was made in different acoustics. It has different offers for visitors; from Byzantine churches to Ottoman mosques, nightclubs, art galleries, cafes, fish restaurants on the beach. Everyone who purchases at least 400,000 USD worth homes, business land and other real estate from Turkey, gets the opportunity to discover the places described in this article, and take advantage of the Turkish citizenship. In order to be Turkish citizen via purchasing real estate from the country’s most valuable cities, you can check Trem Global’s offers, and you can get professional help for subjects such as citizenship.