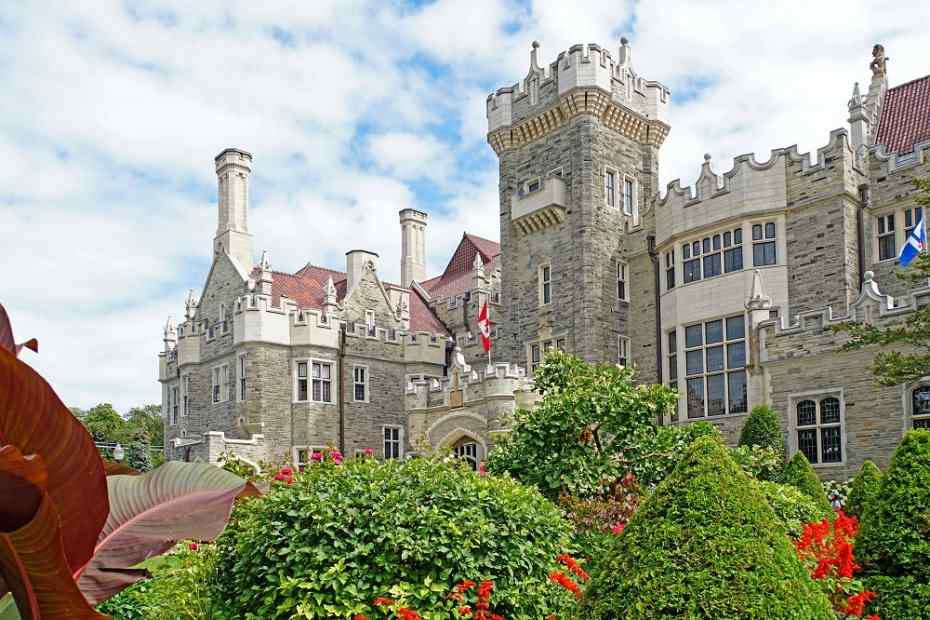 Casa Loma, Spanish for "Hill House," is a Gothic Revival style home and garden in midtown Toronto, Ontario, Canada, that is now a historic house museum and landmark. It is Canada's magnificent castle and Toronto's premier historic attraction. It was built as a home for financier Sir Henry Pellatt between 1911 and 1914 by architect E. J. Lennox, who designed several other city landmarks. The castle is seated 140 meters above sea level, and watches over the city of Toronto.

The tour of the castle is self-guided. With the use of multimedia audio tours, visitors can explore the castle at their own pace.

Casa Loma was briefly used as a luxury hotel in the late 1920s by investors. It became a popular nightclub for rich Americans during Prohibition.

Casa Loma was seized by the city in 1924 for unpaid taxes, and it sat empty for years. Author Claire Wallace stayed at Casa Loma for a night in the 1930s to gather material for a story about ghosts and unexplained phenomena, and she later broadcast an appeal to spare the old structure from demolition. After her broadcast was heard by the vice-president of a nearby Kiwanis Club, the Kiwanis Club of West Toronto, afterwards the Kiwanis Club of Casa Loma, leased the castle in 1937 and began running it as a tourist destination under a sole-source contract for 74 years, until 2011.

According to a book about the "castle," the stables were used to conceal sonar research and production, as well as the construction of sonar equipment for U-boat detection, during WWII. Behind an "Under Repairs" sign, the area was closed. Workers from the covert facility were able to come and go without being noticed because the stables were rumoured to be under restoration.

The castle underwent a 15-year, $33-million exterior restoration from 1997 to 2012, which was mostly sponsored by the city.

As of January 2014, the city entered a new long-term lease and operating agreement with Liberty Entertainment Group, which agreed to spend $7.4 million to continue the castle's upgrades.

Visitors are greeted by a magnificent gothic mansion with vast gardens and a water fountain. The guided tours, stunning interior, restaurants, and a panoramic view of Toronto city are all worth seeing.

You can take a self-guided audio tour and admire the beautiful European furnishings when you visit. On the first floor of Casa Loma, there is also a 60-foot-tall Great Hall. Wooden chandeliers and sculptures adorn the interior of this magnificent hall. A 10,000-book library, Sir Henry's study, and a plant-filled conservatory are all on the main floor. Marble flooring and a beautiful stained-glass roof line the conservatory's foundations.

On the second floor, there are a plethora of bedrooms, bathrooms, and suites where Sir Henry Pellatt's family stayed. The Queens Own Rifle Museum is located on the second floor of Casa Loma. This museum leads to the winding stairs that climb to Casa Lomas' majestic gothic towers. The magnificent views of the Toronto Skyline will captivate you once you reach the top of these towers.

Many well-known films have used the magnificent Casa Loma as a backdrop, including X-Men, Chicago, Scott Pilgrim vs. the World, The Tuxedo, Strange Brew, and others. An 800-foot tunnel extends 18 feet beneath the Austin Terrace from the basement. An exhibit depicting Toronto's depression, prohibition, disease, Great Toronto Fire, and first plane crash is located inside the tunnel. In addition, at the carriage house, there is a car show. The tunnel connects the potting sheds and the stables. Outside of Casa Loma is its gorgeous gardens full of walls and botanical plants.

Casa Loma also has three excellent restaurants which are Liberty Café, BlueBlood Steakhouse and The Gardens at Casa Loma. Pastries, sandwiches, salads, salads, spaghetti, soft drinks, tea, and coffee are all available at the café while The Gardens at Casa Loma is more of a casual dining establishment that serves drinks and full meals. And the BlueBlood Steakhouse provides an upscale dining experience in a polished setting. The one-of-a-kind location has a modern and edgy ambience thanks to a mix of historic heritage architecture, one-of-a-kind heirloom antiques, and modern art pieces by Warhol, Mr. Brainwash, and Salvador Dali.

Why should I setup a Business in Turkey?
The Most Visited Cities By Tourists In Turkey
How to Get a Divorce in Turkey?