Turkey, surrounded on three sides by the sea, known by its nickname '' heavenly homeland '' and thanks to the geographical structure of the gorgeous beach, it attracts the attention of the entire world as a country with pristine sea. The fact that the coasts are abundant, and the summer seasons are suitable for holiday, allow the development of the seaside regions in terms of tourism. Here are 7 bays of secret beaches of Turkey, waiting for their visitors to add memorable moments to the summer holidays…

The first stop of Turkey's most beautiful hidden beaches, a place of harmony of green and blue, Kabak Bay waits for its visitors who will never want to leave. Kabak Bay, which is one of the most beautiful bays in Fethiye, fascinates those who come with its forests consisting of sandalwood and pine trees, its 200-meter beach and its clear sea. It is possible to make short climbs on the rocky walls in the bay or get a different experience on the trip to Aladere Falls. 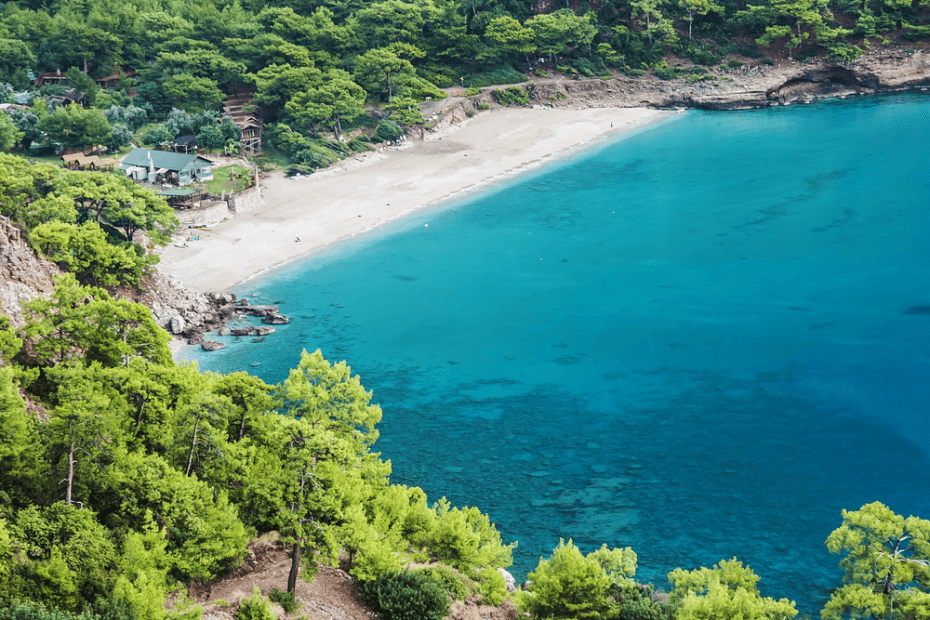 Paragliding made in Babadağ, with 1967 meters altitude, is among the choices of adventurous holidaymakers. There is also the possibility of tasting the delicious delicacies of Kabak Bay. It offers a breakfast feast for those who come with warm village bread, goat cheese, homemade jams, village eggs and olive varieties. In addition to the glamorous scenery and the magnificent sea, this place offers visitors the opportunity to experience local tastes such as olemec soup, tingil soup, sundurme, herbal pancakes, patties and eggplant with meat.

Phaselis is known as an ancient city dating back to 700 BC with historical remains. Being the most beautiful secluded beaches of Turkey, Phaselis Beach is located within the boundaries of the Olympos National Park. The beach is located between the pine trees with its branches and clear azure sea and transportation is done by private vehicle or public transportation. There are 3 different bays in the region which is far from urbanization, quiet and smells of history; North Harbor, Central Harbor and South Harbor are recommended to be seen when you visit Phaselis. 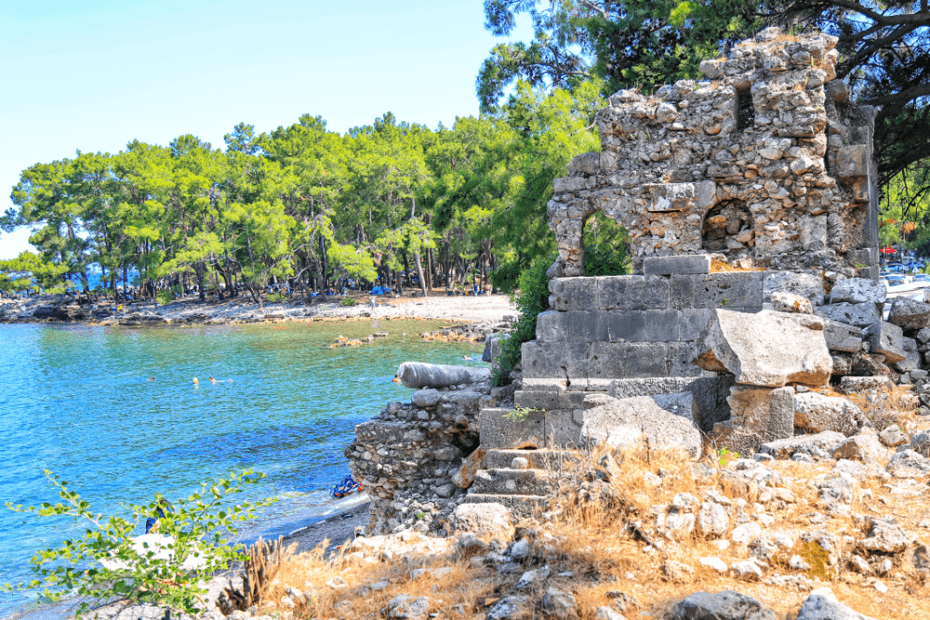 Phaselis North Harbor Beach: North Sea Beach, the second largest beach of the ancient city, has a clean and clear sea with a pebbled surface. Due to the lack of wooded areas near the beach, it is recommended for those who go with umbrellas.

Phaselis Central Harbor Beach: As the name suggests, the Central Harbor Beach is located at the very center of the ancient city of Phaselis, because it does not have a current, it has the appearance of a natural pool. It is preferred by families with children because of the sea's undulating, coastal and shallow surroundings. In addition to this, the ground is sometimes made up of sand and pebbles. The large number of trees around provides an excellent opportunity for those who want to have a picnic or relax in the shade.

Phaselis South Harbor Beach: Almost every month of the year, the sea is clean but choppy at South Harbor Beach, which stands out with its scenery. The beach, which is a stop of the boat tour, attracts attention with its being the most crowded and lively bay. The beach is generally stony and sandy. It is strictly forbidden to burn a barbecue in the area considered to be a first-degree protected area. Phaselis beaches have common showers, snack bars and dressing cabins.

This unspoilt bay can only be reached by boat tours. With this feature, Cennet Bay, is among the most beautiful hidden beaches in Turkey. There are tents, wc / bathroom and kitchen / restaurants in the area. Breakfast, lunch and dinner are served in the bay, which is generally preferred by the communities who love camping. 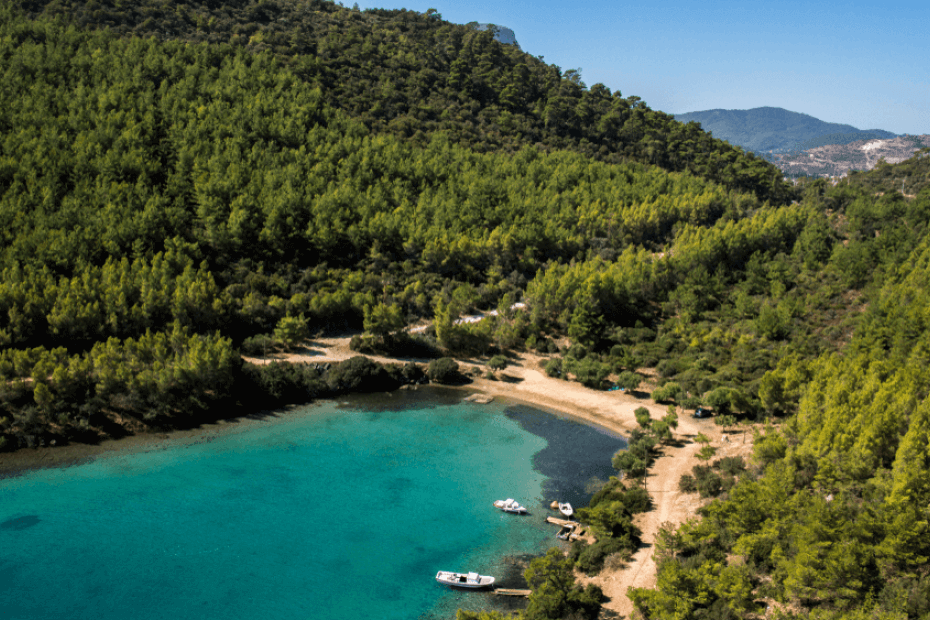 Although the turquoise sea is usually stagnant in the bay, it is possible to encounter a wavy, crazy sea. The pleasure of swimming in the unique nature scenery among the pine trees makes Cennet Bay worth seeing. Holidaymakers who like long walks can choose to walk on the Lycian Way. Some parts of the bay have thermal cameras. Fire is not allowed in order to avoid damage to the forest.

As well as the southern coasts, northern coasts of Turkey are wort seeing. This bay, which is located in Blacksea region and 11 meters away from Cide city center, is famous for its scenery and history. According to the first geographer in history, the first settlement here was founded by the Amazons 3500 years ago. In the bay, which is known as the hidden paradise of the Black Sea Amazons, women's sovereignty and power is still continuing in Gideros. 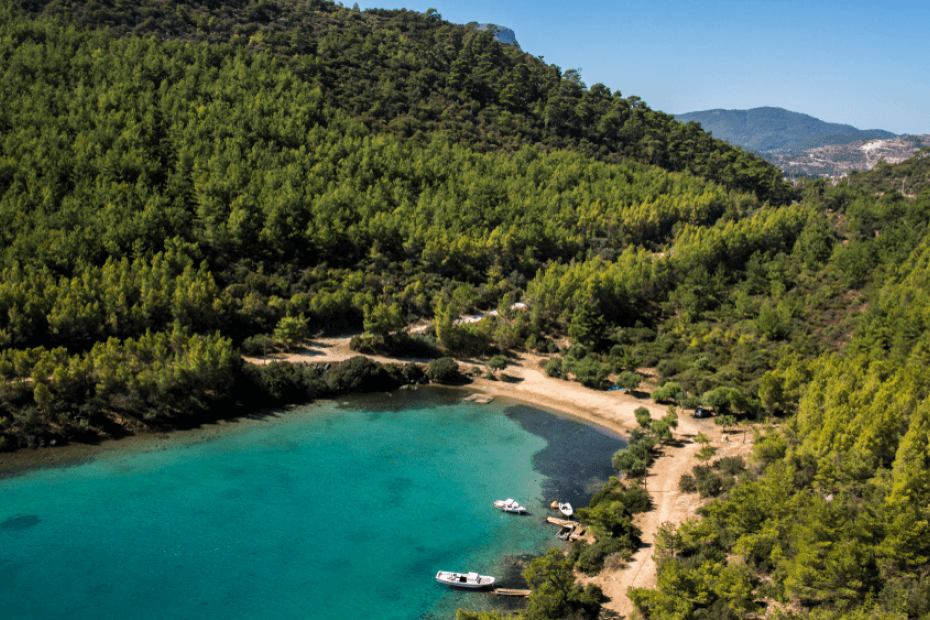 There are very few indigenous people in the region and indigenous women are able to do all kinds of marine related tasks. The bay is full of oak, pine, boxwood and beech trees and promises to enjoy swimming among them. On the cliffs, Genoese cannons, castles and monuments can be seen. In Turkey's one of the most beautiful hidden beach Gideros bay, it can be preferred to spend the night in the hostel or camping. Holidaymakers who travel to Kastamonu are strongly recommended to try local tastes; local delicacies such as meat bread, bandurma, mıklama, ala pilaf, cekme halva, kuyu kebab, cırık dessert are among the top delicacies to be tried.

One of Turkey's most beautiful hidden beaches, surrounded by high cliffs, like a hidden paradise Butterfly Valley, is a place that is protected by the unique beauty of nature itself. The valley is named after a hundred different butterfly species, including endemic orange, black and white tiger butterflies. Due to the endemic species in the valley, which is a world heritage site, people who want to get the chance to see butterflies are recommended to come in April. 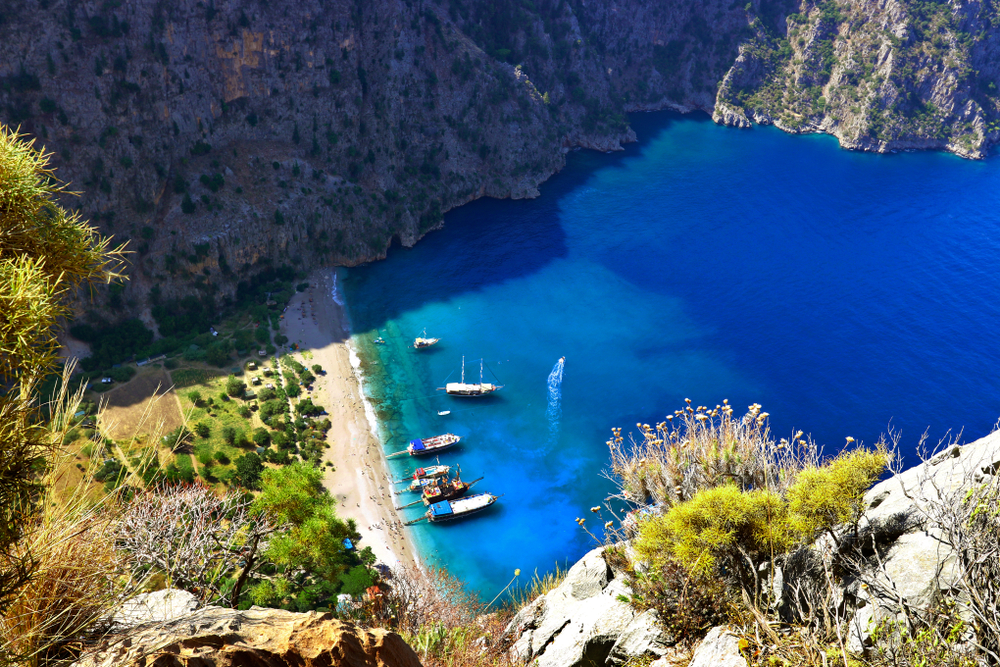 Butterfly Valley, which has a white sandy beach with a waterfall spilling from the cliffs and a perfect view, attracts great interest of all domestic and foreign holidaymakers. It can be reached with only a half-hour boat ride from Ölüdeniz, while adventurous climbers can choose to descend from the rocks to the valley. If you have a private car, the valley can be reached with long walks. The valley has places for accommodation, such as tents, tree houses, bungalows. Butterfly Valley is a holiday paradise for people who want to experience adventure and peace together.

Patara Beach is considered as the longest beach of the Mediterranean Sea with its 18 km area. The beach is easily accessible from the towns of Fethiye or Kaş and is one of the rare beaches where is declared as Special Environmental Protection Area and the turtles lay their eggs. Between 15 May and 15 September there are people on the beach between 08:00 and 20:00, and turtles on the beach between 20:00 and 08:00. It is forbidden to enter the beach or turn on the light in turtles’ period. In Patara, the sea is choppy, and the coasts are windy. After a walk on the beach that resembles Maldives and swimming in the most beautiful shades of blue, you can enjoy history in the ancient city of Patara. 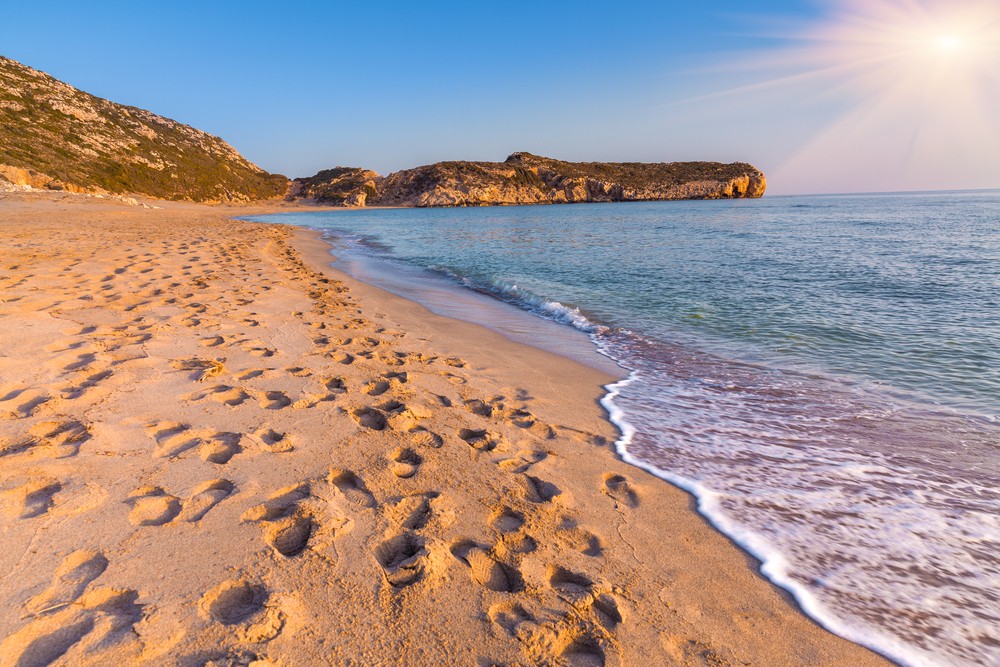 The traces of Lycian history can be reached with only a 1.5 km walk from the beach to the south. The city reveals the region’s past and the ruins of the Lycian history some of them are; the ancient theater, the Temple of Apollo, basilica, necropolis and baths. There are sand dunes which are concentrated on the beach and used in the desert scenes in Yeşilçam movies, which add a desert atmosphere to the beach. Patara beach offers a unique view at sunset, which looks like the postcards because it is completely westward. From the sand dunes, photographers can capture spectacular views. Although the village is known as Patara, the real name of it is Gelemis, whose most famous dish is pita, with the exception of fish dishes, a must for the coastal villages.

Kaputas beach in Kalkan located in Antalya, is among the rare natural beauties of Turkey. The beach is surrounded by steep cliffs known as Kaputaş. The beach, starting from the roadside and 187 steps down, fascinate holidaymakers with its view every year despite the difficulties. The coolness of the sea and the turquoise color of the sea, which is not seen in the Mediterranean coasts, is the result of the water flowing from the ground to the sand. 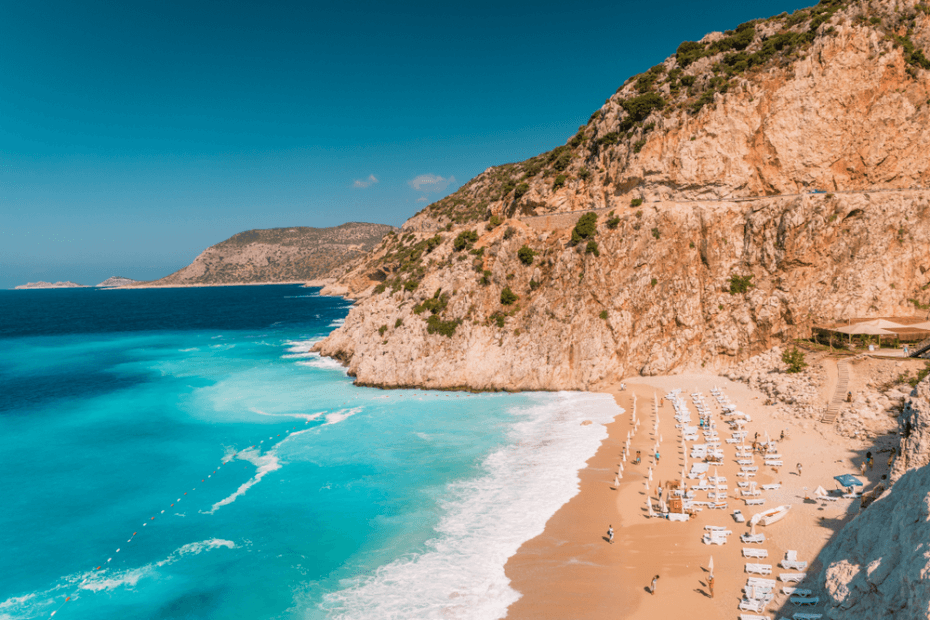 Thanks to this feature, the beach is defined as the ’Canyon Mouth’. Being among the most beautiful hidden beaches of Turkey, the most attractive feature of Kaputas Beach is the presence of Blue Cave. The unique beauty and charm of the cave can be explored by boat tours. The sand of the beach, which still maintains its virginity, has tiny pebbles. There are also dressing cabins and food and beverage buffets on the beach. Umbrellas and sunbeds can be rented at the beach.