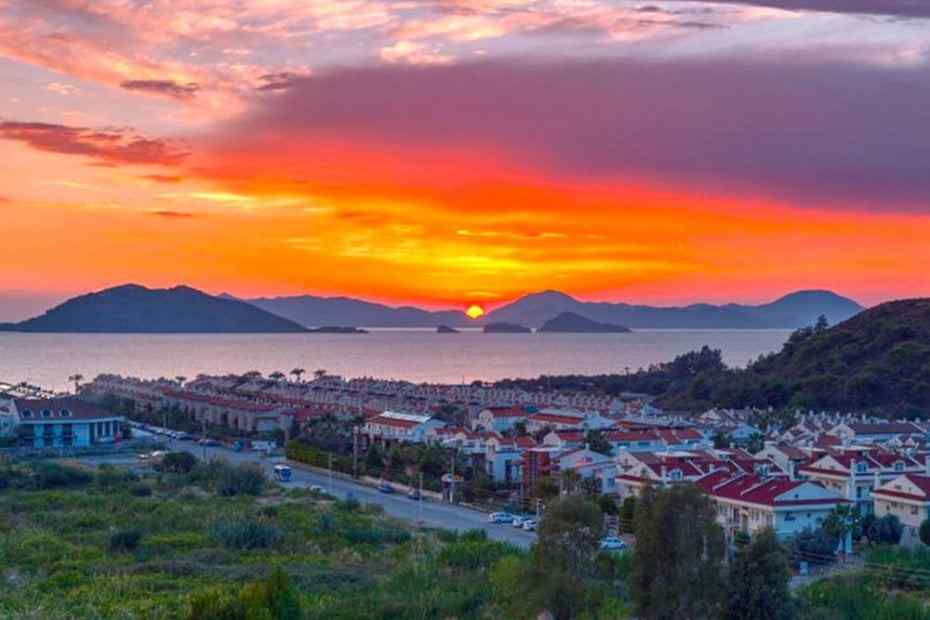 The sun, splitting the skyline at sunset, leaves the night to the shine of the stars with its intertwined color and light beams. This visual feast that inspires artists has different meanings for the audience. For some, the most beautiful image of the day, for some of the saddest part of the day. In Turkey, there are spots that have this this enchanting image that goes beyond illuminating the lands. So where are the best spots for viewing the sunset in Turkey?

Mount Nemrut, one of the historical sites that has preserved its mystery in Adıyaman for many years, is home to many historical works made by Antiochos I. the King of Commagene. 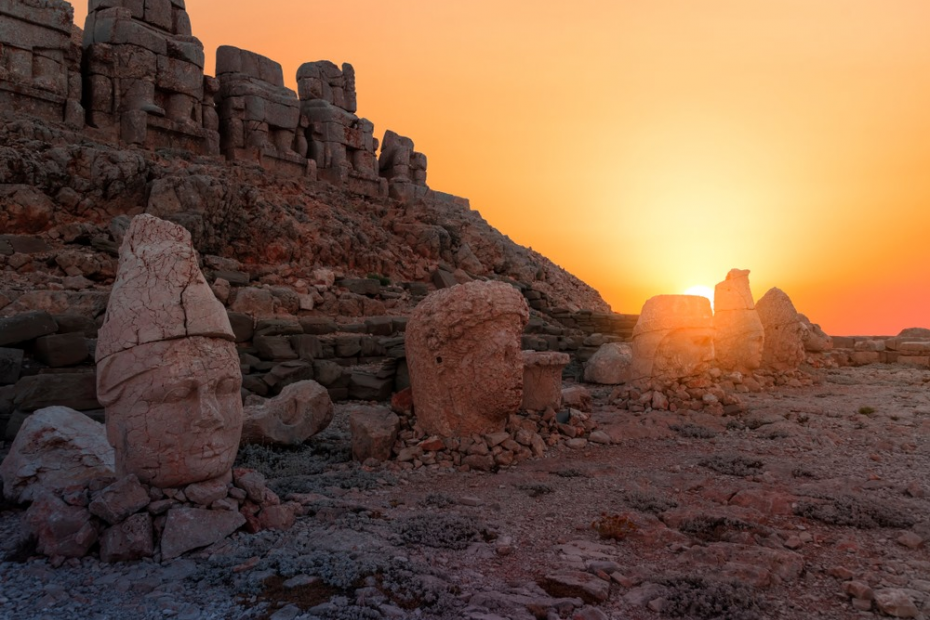 The sun sets among the ruins of Mount Nemrut, which is called the throne of the gods, and among the giant statues in the vicinity, constitutes the most fascinating sight to be seen in the country. It is highly recommended to witness this scene, which portrays a scene from history, where the sun is almost palpable. Mount Nemrut in Turkey, one of the places with the most different atmosphere, offers a mystical landscape to its visitors.

Cappadocia, the most beautiful region of Nevşehir, welcomes the sunset lovers. In this romantic place where you want the sunset to last forever, the sun sets among the fairy chimneys and fascinates with its yellow, red and brown tones. 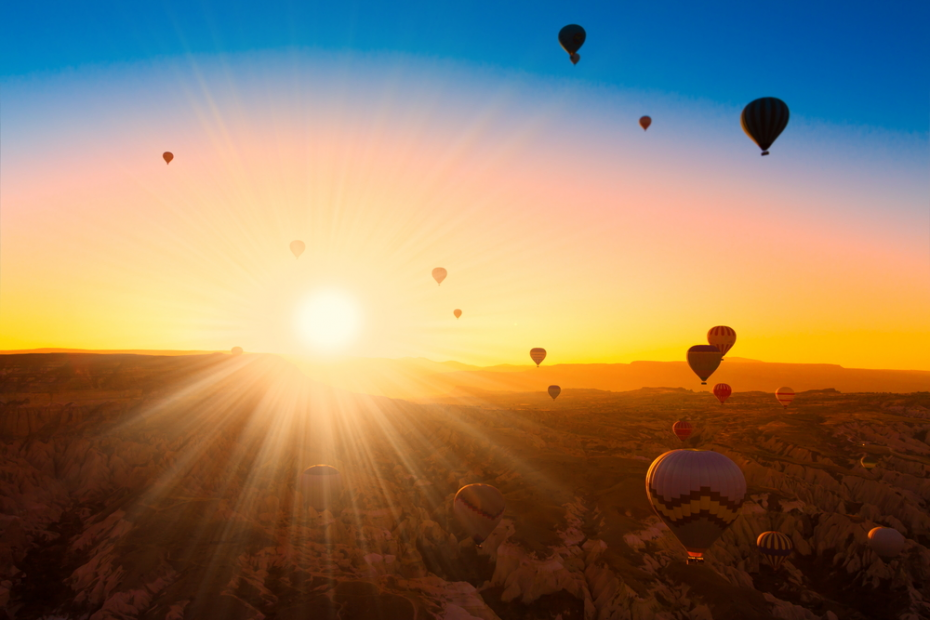 In Cappadocia, which is one of the first places that come to mind when it comes to sunset views, you can live this pleasure accompanied by fairy chimneys or balloon. The sun sets at sunset, accompanied by fairy chimneys rising above the mysterious geography and balloons dancing in harmony with the skies, and the audience wishes to enjoy it forever.

Sunset in Kaş, one of the most beautiful districts of Antalya, the coast of the Mediterranean, is another view. 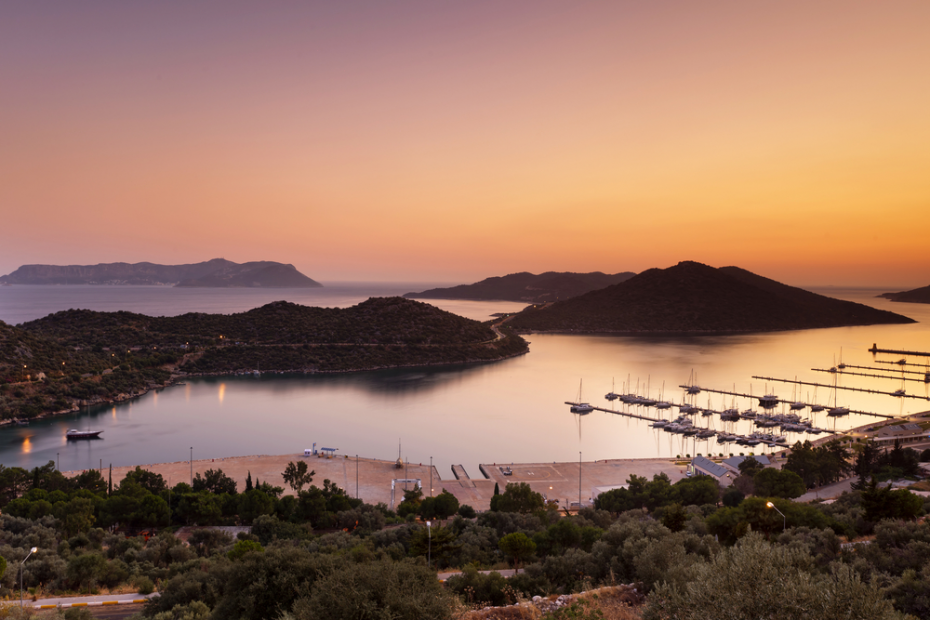 Kas, unarguably one of Turkey's most beautiful holiday destinations, greets its visitors with the fascinating landscape of the sun, which paints the blues red. The scenery, where photography lovers can capture wonderful frames, arousing the desire to stop time, offers an incredible visual feast, especially in Saklıkent Canyon and Simena Ancient City.

Close to the Dardanelles, in the Aegean Sea, this wonderful island of Bozcaada, is known as the only district in Turkey that has no village. 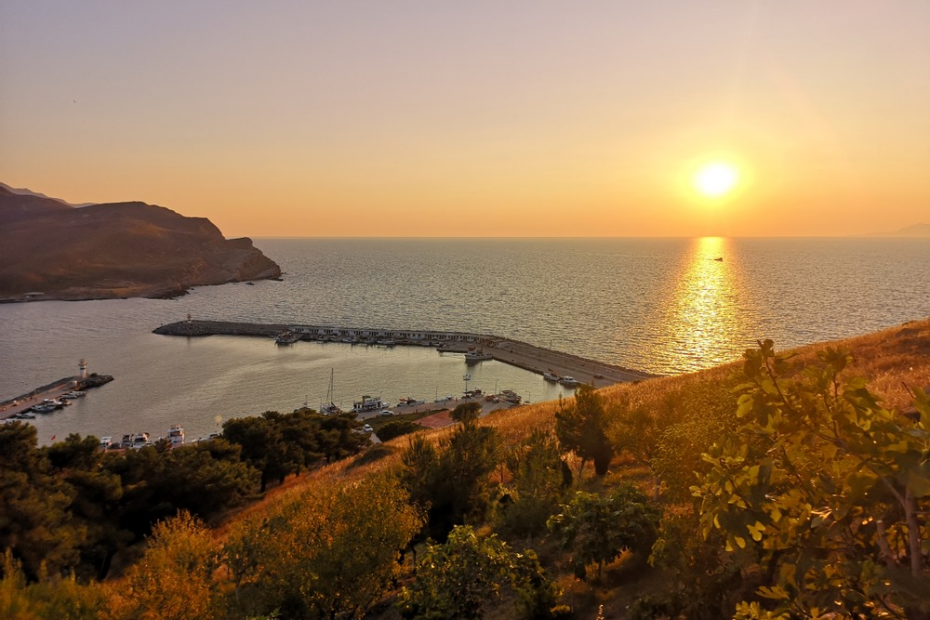 It is a privilege to watch the sunset on the island which can be reached by Bozcaada ferry departing from Geyikli town of Çanakkale. Especially Ayazma beach and Habbele Bay are other places that have spectacular views created by the setting sun. Wind Rose in the westernmost part of Bozcaada reflects the romantic dance of red rays in the blue sky for those who want to watch the sunset from the hills.

Gumusluk, one of the most charming neighborhoods of Bodrum, which promises “a sweet peace’’ to those who go, is one of the rare places where the day can be ended with a magnificent view accompanied by cold soft drinks. Gumusluk creates a beautiful moment where you can dive into the sea on blue flag beaches during the day and watch the view embracing the end of the day in the evening. There are hills for those who want to watch the sunset from high areas. Landscape lovers who prefer to watch the sun over the sea are enjoying this beauty on Koyunbaba side.

The ancient city of Asos, located on a volcanic hill at the borders of Çanakkale province, awaits its guests with its historical buildings and the unique beauty of the sunset. Asos, known as a beauty from ancient times, fascinates those who see the sunset. 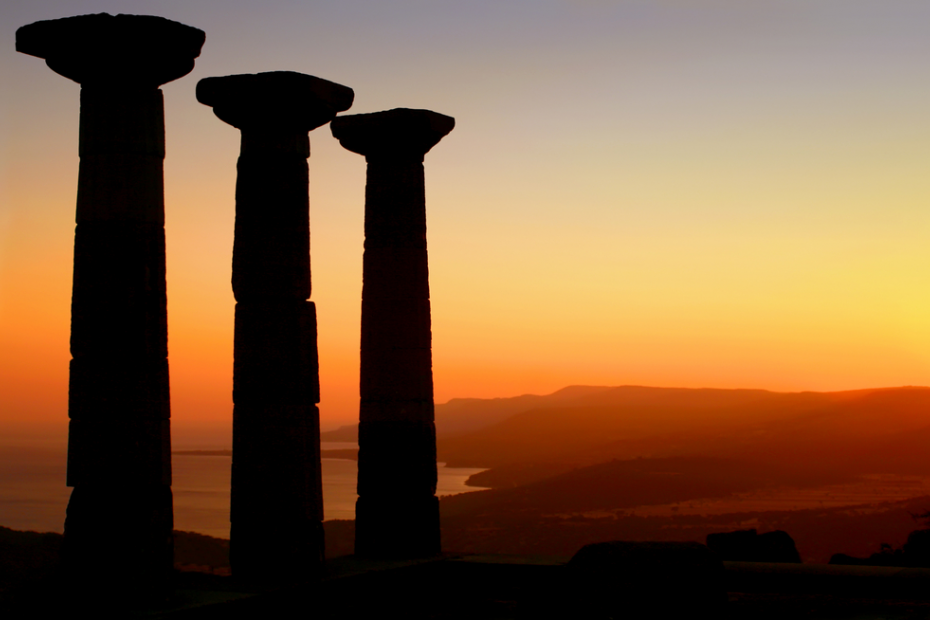 Those who go recommend the sunset should be watched at the Temple of Athena, where the color of the setting sun and the historical atmosphere are together.

In Western Black Sea, a charming district of the province of Bartin, Assos, retains its place among the best sunset spots in Turkey. to watch the sunset that leaves Fatih sultan Mehmet fascinated, it is recommended to go to the Bakacak location. It is said that after the conquest of Amasra, Fatih Sultan Mehmet looks at the city from Bakacak and asks, “ Is this the eye of the world?’’. Amasra, one of the most beautiful landscapes in the country, is waiting for its visitors.

Many points in Ayvalık, in Balıkesir district, promise a magnificent view to those who come. Seytan Sofrası, which is one of the most beautiful places where sunrise and sunset can be seen, is one of the most popular ones. Şeytan Sofrası, between Ayvalık and Sarımsaklı, is called “paradise“ and “the place where the sun is most beautiful ”. The sunset, which is applauded by the crowd who does not finish the summer holiday without watching the landscape, is among the most fascinating landscapes in the world.

Kizkalesi, which has become a symbol of Mersin, is accessible with fishing boats. Kizkalesi, situated on a cliff above the sea, is known as a place where you can swim in the sea until November and winter does not show up. 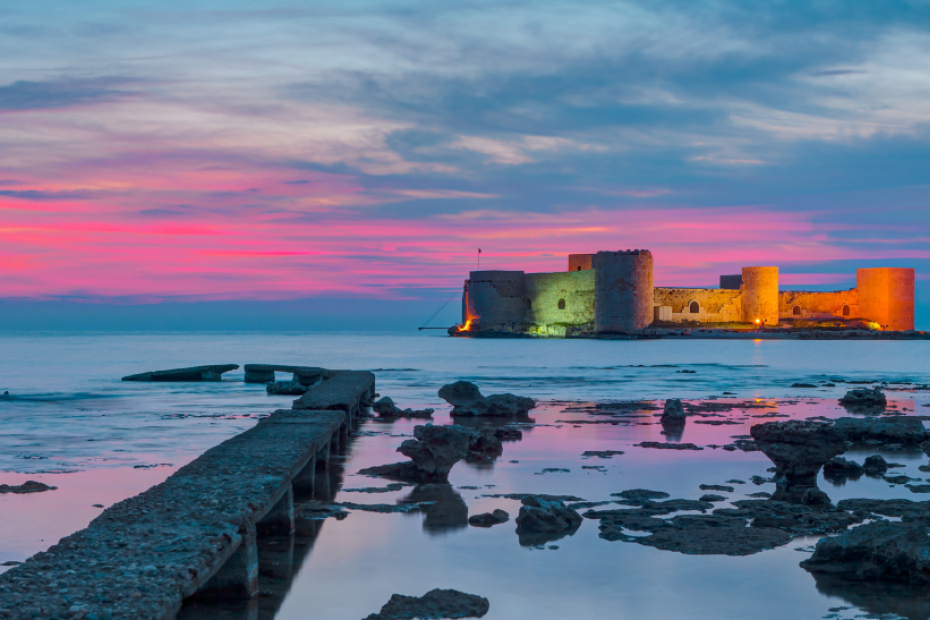 At sunset in Kızkalesi, the sun slowly fades along the horizon, leaving behind red beams of light. Reflected in the sea behind the castle, this image remains one of the most beautiful memories in memory.

If you can catch the right time when you get on the ferry in the evening, Istanbul ferries become one of the most beautiful places to watch the sunset. 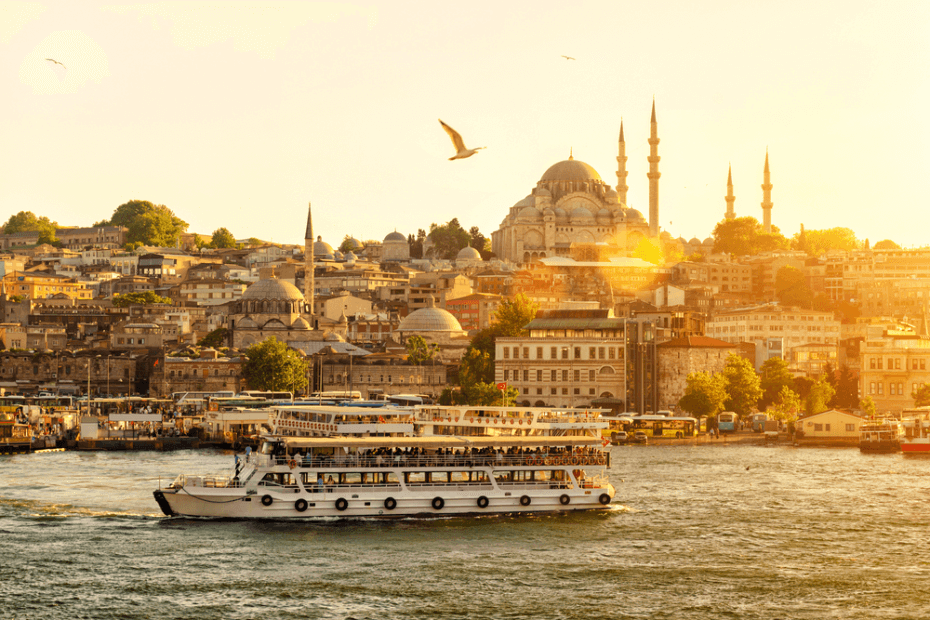 while taking the right path to the destination you are accompanied by the most beautiful time of the day. While facing the copper color left on the sea created by the slowly setting sun behind the Istanbul landscape, one almost wishes time to stop The ferry and boats that lead the touristic and historical places such as the Maiden's Tower and Galata Tower are also accompanied by the sunset shot.

Filyos, the charming town of Zonguldak, which is one of the paradises on earth hidden by the Black Sea with its deep blue sea and natural beauties, is a place worth watching the sunset. 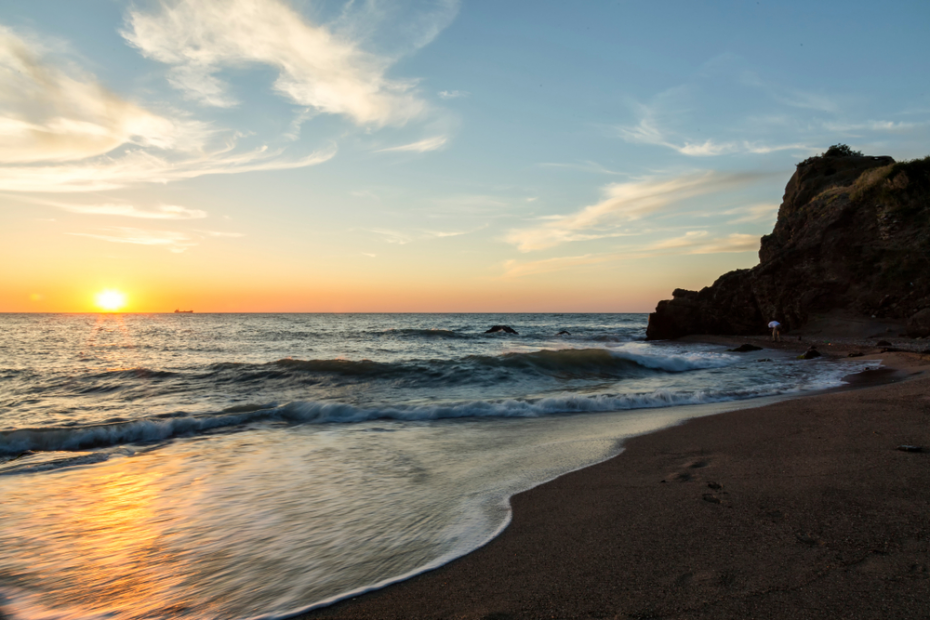 3000-year-old history of natural beauty, the atmosphere that arises at sunset, fascinates people. Filyos beach is seen as one of the most beautiful places where you can sit and enjoy the red scenery.

Due to presence of Gokceada in Turkey's west, where the sun sets latest, sunset reveals a unique beauty. According to Homer's Epic of Iliad, Gökçeada is the place of Poseidon, the sea god. Incirburnu, also known as Imroz Island, is one of the magnificent viewing points where the sun's red glow falls into the sea. Gokceada offers an amazing view from where you can greet the sun from all over the island to everyone who wants to watch the sunset.

Gemiler Island, one of the most beautiful routes of Fethiye, is a first-degree natural site. Known as St. Nicholas in history, there were many church remains on the island, which was formerly a settlement of the Byzantines. The sunset seen from the island is called the best view in the region. The island that is 9 km away from Fethiye can be reached easily from Oludeniz and Gemiler Bay.

Located in Izmit, Kerpe is known as an old fishing town. Natural beauties can be captured from every corner of the place, which has magnificent cliffs and a unique atmosphere as if it were made by a sculptor.

Kerpe, is among the best spots to watch the sunset in Turkey. The unique red feast created by the sunset fascinates those who see it.

Located in Beykoz, Istanbul, called the eye of the photographers, the landscape is always eye-catching. The image of the Sun's disappearance behind the Bosphorus by opening its last lights promises a feast to the audience with all its majesty.

Can I get Turkish citizenship by buying a house?
Sarıyer from Past to Present
Famous Turkish TV Series and Their Settings