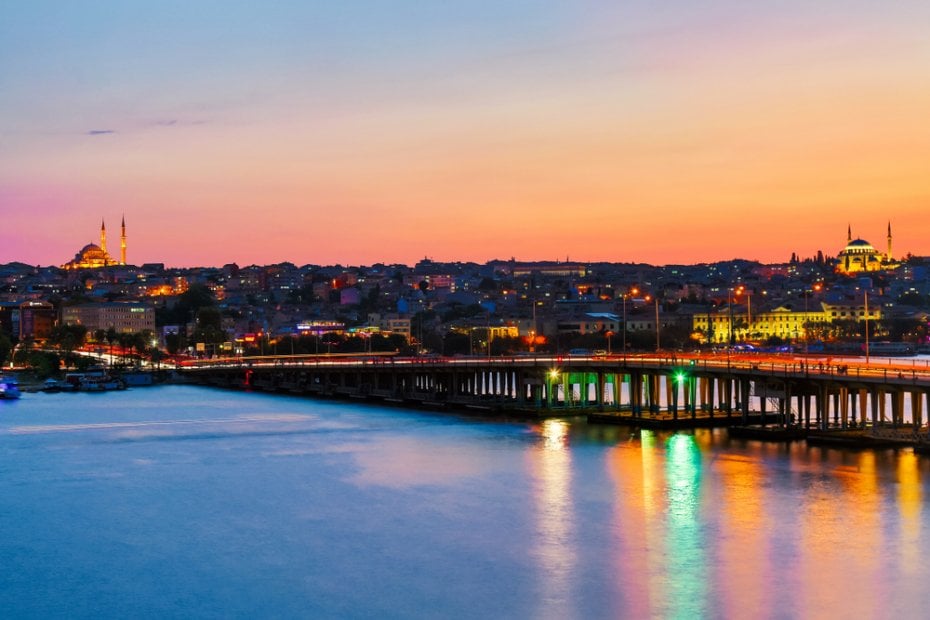 Haliç, with its location separating the historical peninsula and Beyoğlu in Istanbul, is the place where foreigners call the Golden Horn and now houses one of the most beautiful viewing terraces of Istanbul. The parks, which have all shades of green, fishing inhabitants and  Haliç exhibiting its colorful tulips at the time of the tulip in Istanbul, have come to the present day by spending the most valuable time with the Tulip Era, where the most consumption expenditures were made during the Ottoman Empire. Golden Horn, which has many legends, finds its place in mythology.

According to the legends, the story that led foreigners to call the Golden Horn as the Golden Horn starts with the love between Io , the daughter of Argos King Inakos, and Zeus.  Hera, Zeus' wife Hera, is jealous and plans to kill Io. Zeus turns Io into a white cow to protect her from his wife’s wrath.  Hera finds out the truth and sends a horsefly to do evil.  According to the legend, the cow runs like crazy because of this situation and crosses the continents. The cow, unable to get rid of the discomfort of the horse fly, cannot stand the bites of the fly and shakes its head on the ground, turning up the land pieces and creating deep crevices. According to legend, this is how the Golden Horn is known as the Golden Horn. Then, Io later gave birth to a daughter named Keroessa from her association with Zeus, Keroessa married Poseidon, the god of the sea, and gave birth to the Byzantine Empire's founder, Byzans.

Treasures Hidden in the Deep of the Golden Horn

Haliç is one of the most valuable places among the legends because of its geographical location in Istanbul and it is one of the mysterious regions where many narrations have been narrated throughout history. The existence of a treasure hidden under the sea of the Golden Horn is the most known among the urban legends in Istanbul. Rumor has it that the treasures in the chest lie deep in the Golden Horn. Such rumors are not accepted by any authority in the city. 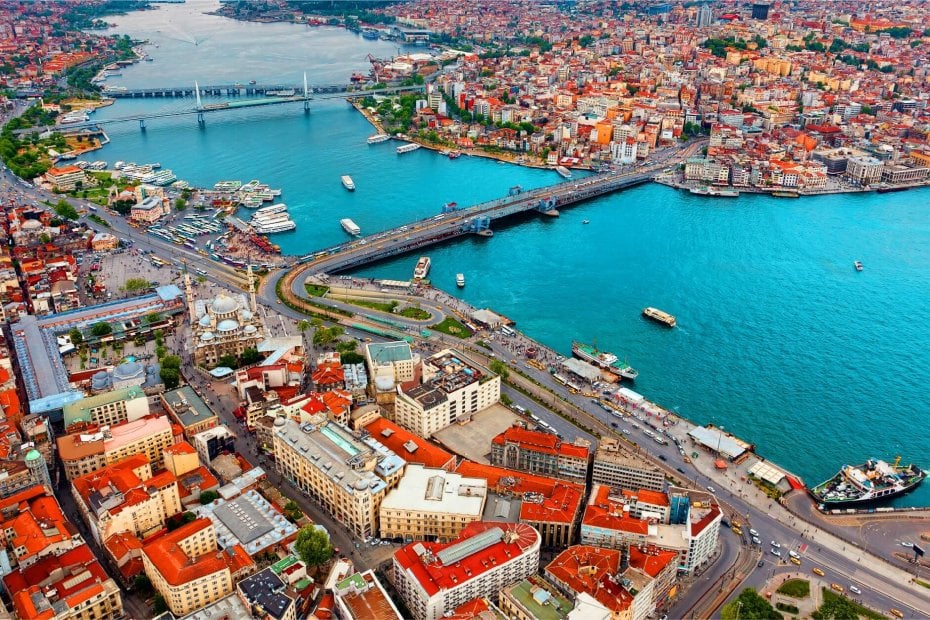 The advent of this rumor to the present day strengthens the possibility of such a rumor. When Fatih sultan Mehmet, the conqueror of the city, conquered Istanbul, the Byzantines threw their gold into the sea rather than giving it to the Turks. Even if a few documents are passed in the archives, there is no treasure that has been reached. However, the ship of the Byzantine Emperor Justinian was sunk here while fleeing the Ottoman Empire. It is said that all the treasure of Byzantine palaces was buried in the waters of the Golden Horn. At that time, galleys carrying the commercial spoils of Genoese and Byzantine were sunk here. When we come out to present from legends, it is like a fortune inherited to all Istanbulites.

The Most Important Pawn of Istanbul's Conquest: Golden Horn

The conquest of Istanbul happened when the forces ruled by Ottoman Emperor Mehmet II captured the city as a result of the siege that occurred from 6 April to 29 May 1453. The most important moments of the conquest are taking place on the Golden Horn. When Mehmet the Conqueror realized that the city did not fall after the attack on the walls of Istanbul with a cannon called a hawk that a man could enter, he shifted the ships to the Golden Horn with sledges. Knowing that Istanbul could not be taken from the siege from the sea, the sultan changed the course of the war after the Byzantine Emperor Constantine closed the Golden Horn to the ships with chains, so they dragged the ships from the land to the sea with oiled sleds. The Byzantines, who saw the Ottoman navy on the shores in the morning, were horrified and defeated. As a representative of this moment, a celebration is held every year in Golden Horn.

Sadabad, which is one of the entertainment venues attended by all the people in the Tulip Era, is still held today in the Golden Horn, especially during Ramadan. As a result of a wrong policy, it was chosen as an industrial area in the 1950s, and the mansions and parks that it hosted gave way to the factories over time. This caused the waters of the Golden Horn to become increasingly polluted, and for all Istanbulites, the Golden Horn meant bad smell. In the second half of the 1980s, the Haliç rescue project was initiated to change this, and despite the change in mayors, they embraced the project and it made Haliç a place where canoeing, fishing and picnicking in parks.

Galata Bridge on the Golden Horn connects Karaköy and Eminönü.  Open to pedestrian and vehicle traffic, all Istanbul residents are fishing on the bridge, especially on weekends. 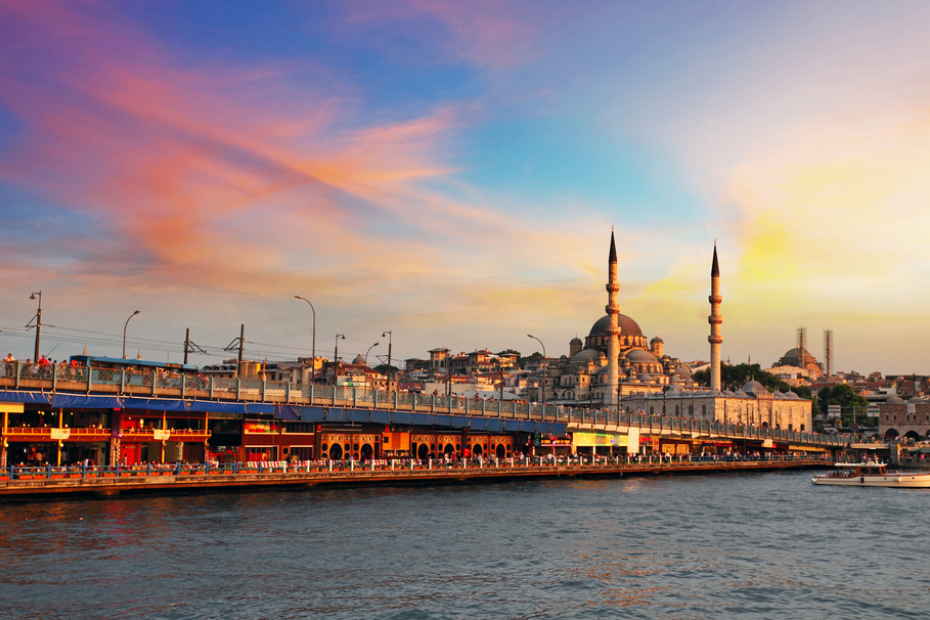 Under the bridge you can sit against the sea and sip Turkish coffee, the fish restaurants provide the environment where you can get the freshest fish with alcohol, leaving many foreigners to admire the view.  At the end of a stressful Istanbul day, all visitors will have a pleasant evening in the middle of history, the sea and the myths triangle.

The tower, which you can see when you reach Tunel from Karaköy and raisedyour head up to the sky is known to be built by the Genoese in 1384. During the Ottoman Empire, the tower used by the janissaries for observation, III. Selim's time was used to observe fires.  Due to the destruction in the fire, restoration takes place in the time of Mahmut II. And, according to the myth, Hazarfen Ahmet Çelebi, who lived in the Ottoman period in the 17th century, managed to fly from the Galata Tower with his wings and fly over the Istanbul skies. 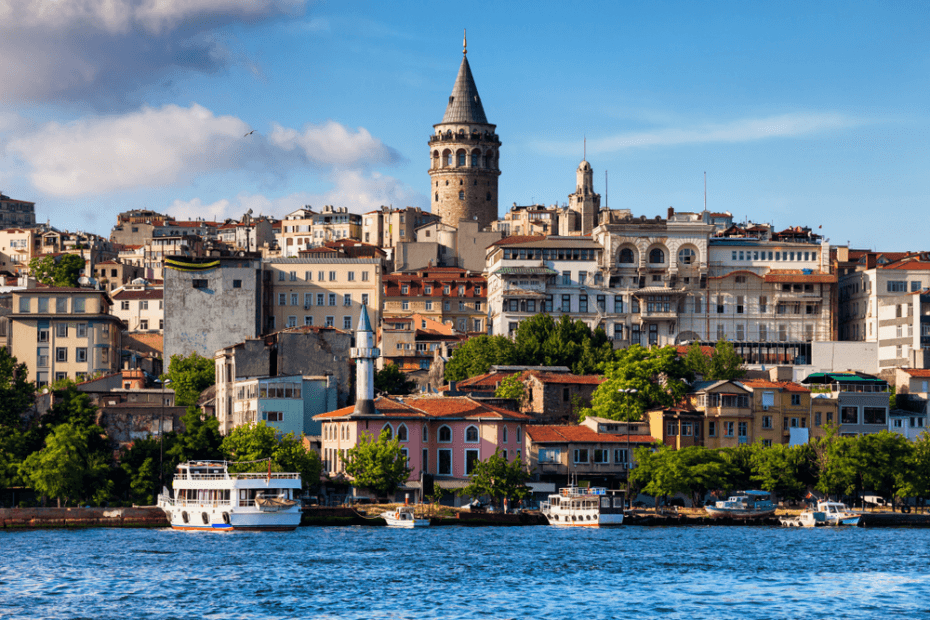 Hezarfen Ahmet Çelebi is thought to have done something like this by being influenced by Leonardo Da Vinci's works concerning flight of birds.  After leaving the Galata Tower and passing through the Bosphorus, Çelebi flew to Üsküdar district on the Anatolian side. He was exiled to Algeria by Murat and died in exile at the age of 31.

Pierre-Loti, the Unforgettable Friend of the Golden Horn

On the ridges of the Golden Horn is the Pierre-Loti hill, one of the most popular attractions of Eyüp, and it takes its name from the Turkish-friendly French writer Pierre Loti, who came to Istanbul as the French Embassy, gained the respectability of the local people in a short time and became a citizen of Eyüp. When Pierre came to this hill that is one of the sights of the city, as he was working in Istanbul, he frequently stated that he loved coffee here and wrote his novels here. 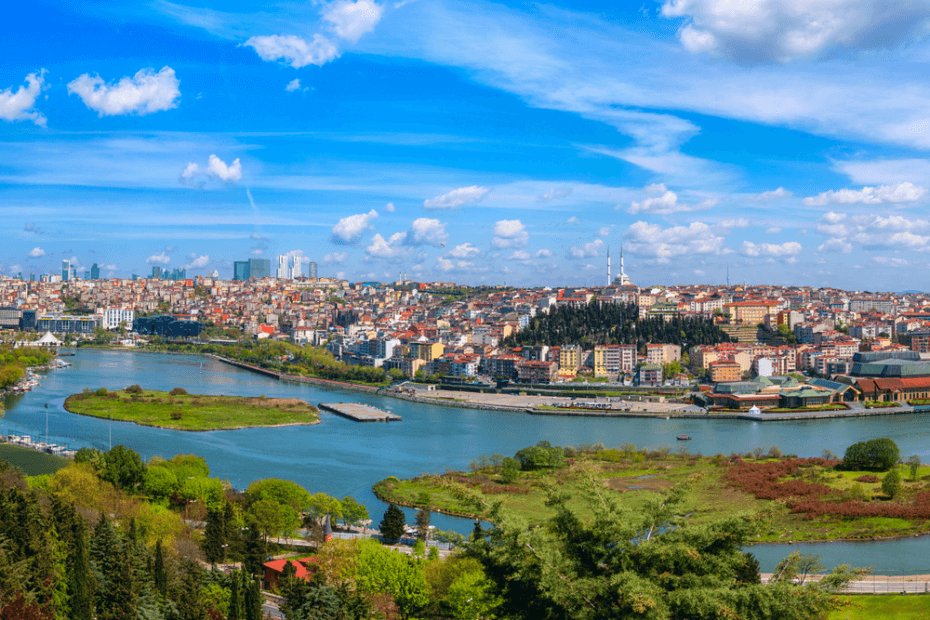 Therefore, the Istanbulites immortalized the cafe here by giving it its name. Pierre-Loti hill, one of the most visited places in Eyüp, is still waiting for its new visitors to find the traces of their legends while enjoying the unique view of the Golden Horn with the taste of the coffee from that time. 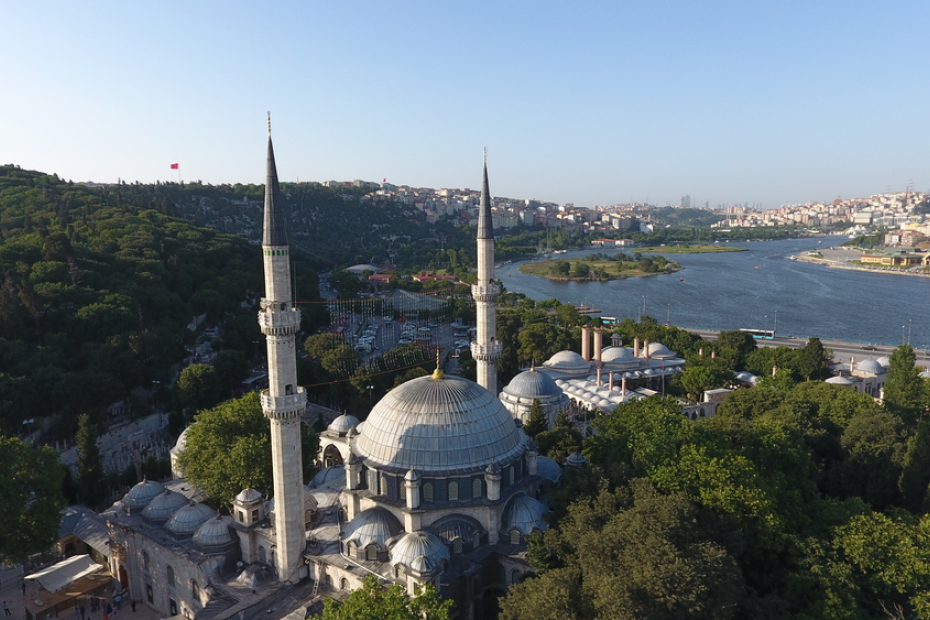 The Mosque took its name from Hz. Abu Eyüb al-Ensari who hosted Islamic Prophet Hz. Muhammad when he came to Medina for the first time and he died after joining the siege of the Umayyads in the siege of Istanbul in 668-669, the place where the tomb is located emerged with the dream of Aksemseddin, who had taught Fatih Sultan Mehmet in the conquest of Istanbul. The place where the tomb is located was turned into mosques, madrasas, imaret and baths by Fatih Sultan Mehmet again, in 1459.

The place, which is called Feshane on the edge of the Golden Horn, was established in 1839 to meet the needs of fez and aba with the decree of Sultan Abdülmecit. The place, which is the first industrial textile factory of Turkey in real sense, was established in 1851 by taking help from Belgium. At the same time, the ground and steam weaving units, which have one of the first examples of steel construction structures in the world, were brought from abroad.  In 1866, it became one of the most qualified weaving factories of that period. In 1939, under the name “Feshane Mensucat A.Ş.”, it was turned into Sümerbank Defterdar Factory. 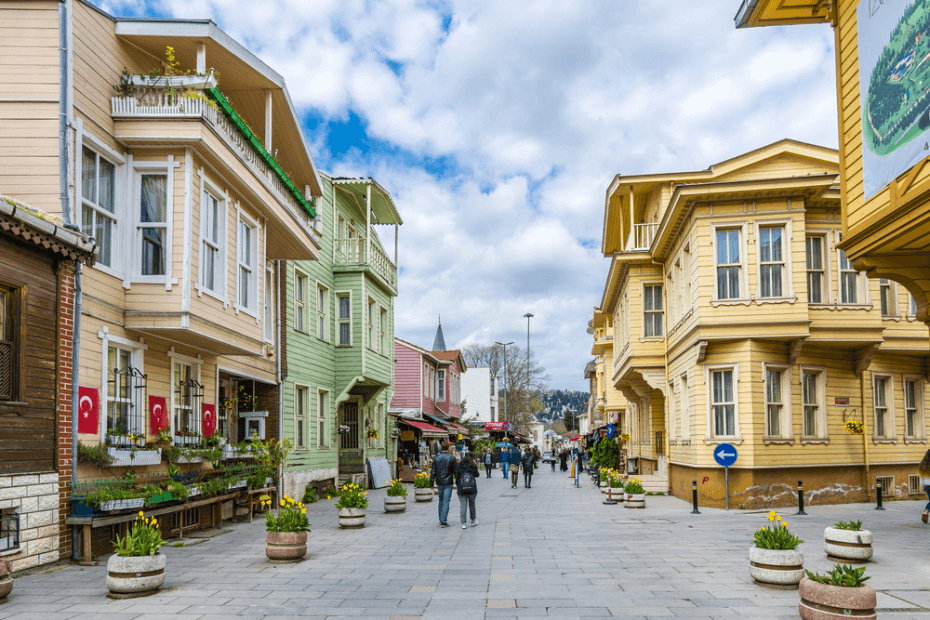 The factory, which was emptied as a result of the extensive landscaping activities started in 1986, has been restored and re-valued as a place where the entertainment is held in the evenings of Ramadan. The venue, which hosts various organizations from time to time, is one of the must-see places of the Golden Horn. As a result of neglect and wrong policies that polluted the area, Golden Horn now welcomes both domestic and foreign visitors with its parks and gardens, Miniatürk Turkey Park which is the worlds’ largest park being established on 60,000 square meter, Cibali Tobacco Factory and imperial caiques that are not carrying Sultans any longer.