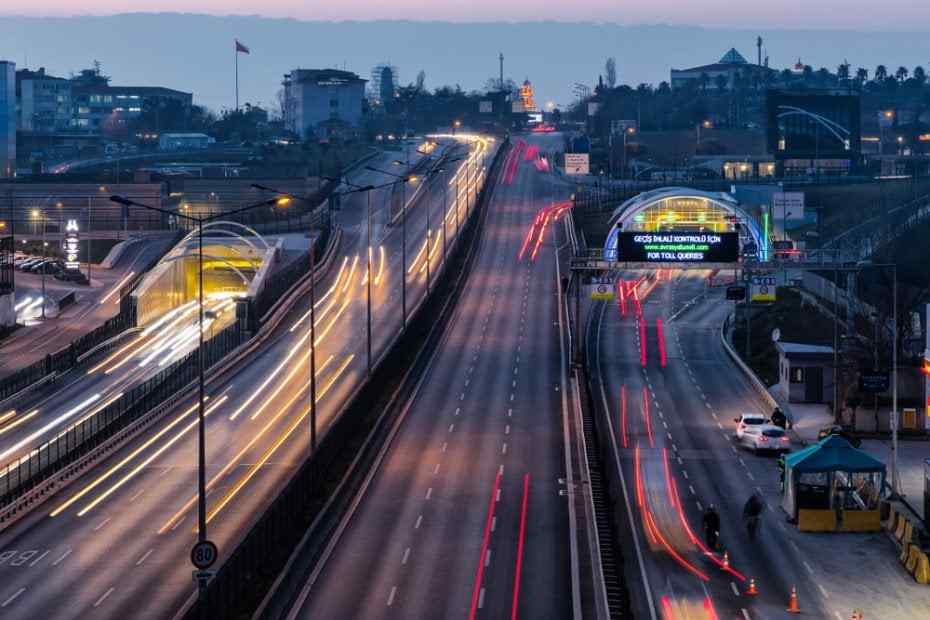 In recent years, Turkey Vision 2023 Plan is accelerating within the framework of the project such as transportation, infrastructure, energy and defense areas. Large-scale projects in the field of transportation outperform the national income of many countries with their financial costs. The strategic location of Turkey as a bridge between East and West, combined with transportation investments, is not only big but also is a key transit country providing a transport destination as the fore in. These projects are also intended to support local municipalities against problems such as the heavy traffic caused by migration from rural areas to large cities with a population of over 80 million. Turkey's major transportation projects, reaching an annual volume growth of 20% since 2002, gives impetus to the development of the transport and logistics sector. Here are the details of the projects including high-speed train connections, bridges, subways, the world's largest airport and the construction of a 50 km canal that will turn half of Istanbul into an island...

One of the biggest projects designed by the Ministry of Transport as the solution to the increasing traffic density in Istanbul stands out as the Marmaray Project. In fact, the idea of joining the two shores through an underwater tunnel goes back to being presented to sultan Abdülhamit by a French engineer. The project, which is realized with today's technological facilities, connects two continents as underground and above ground metro lines to be integrated with modern, high capacity, fast and other transportation systems from Halkalı on the Asian side to Gebze on the Asian side. Turkey's major transportation projects like Marmaray Project with the European high-speed train network, Istanbul - Ankara High Speed Train and Kars - Tbilisi railway projects in the future when considered in conjunction with the East and West is expected to create a seamless transportation network. 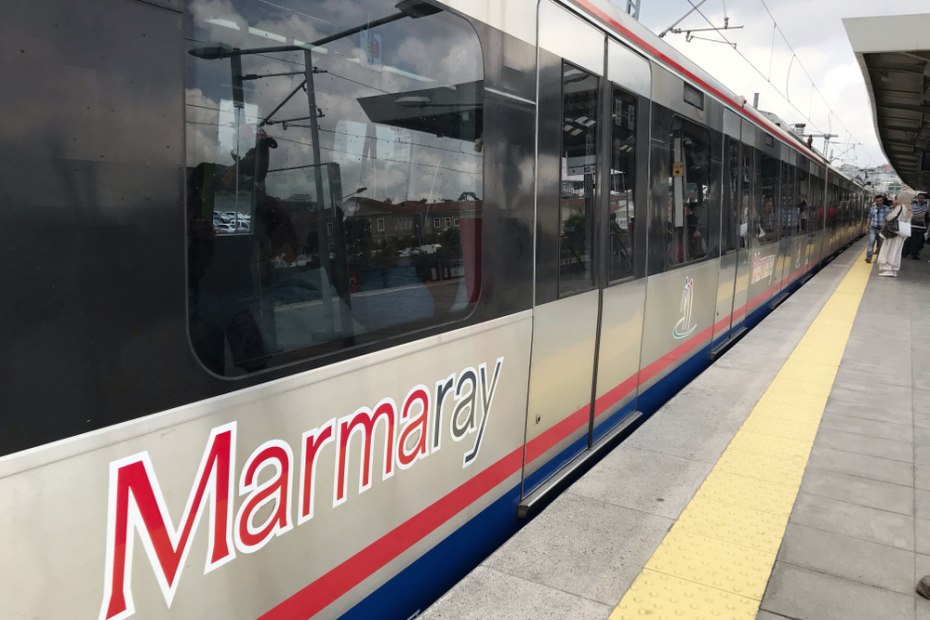 With the project, which cuts the gap between Asia and Europe to 4 minutes, it becomes possible to ease the burden of automobile traffic and to reduce the use of less vehicles by reducing air pollution and dependence on individual vehicles.

Recently, with increment in the number of Turkish citizens traveling abroad and concurrently, getting a Turkish citizenship easier than before by buying minimum 400,000 USD worth of a real estate, the demand for airline also is increasing in Turkey. Turkish Airlines is becoming one of the largest airlines in the world due to the growing demand. Due to the lack of capacity at Istanbul's existing airports, the international airport currently under construction in the Arnavutköy district on the European side, is expected to be adequate. 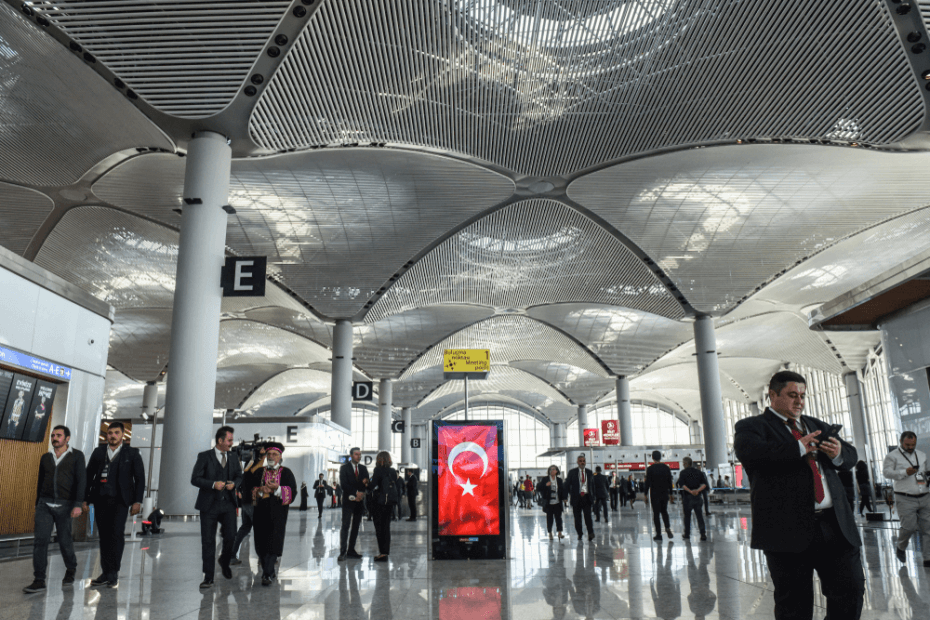 Istanbul Airport, which will have an annual capacity of 200 million passengers after the completion of six runways and four stages by 2028, seems to be a candidate for becoming a global aviation center that operates flights to more than 100 airlines and over 300 destinations worldwide. Thus, considering its capacity and strategic geographical location of Istanbul, it is expected to become a regional transfer base and not only for direct flights. Because a significant part of the world's high growth economies are within a six-hour flight range of the country, it is planned to be the center of not only passenger but also airport cargo transportation.

Eurasia Tunnel Project among Turkey's major transportation projects, is to resolve the problem of increasing traffic of Istanbul which includes construction of a double-deck tunnel between Kazlıçesme and Göztepe highways. The tunnel built under the sea floor of the Bosphorus has a daily capacity of 120 thousand vehicles in both directions. The project, implemented in December 2016 which, reduces the travel period between Kazlıçeşme and Göztepe from 100 minutes to 15 minutes. 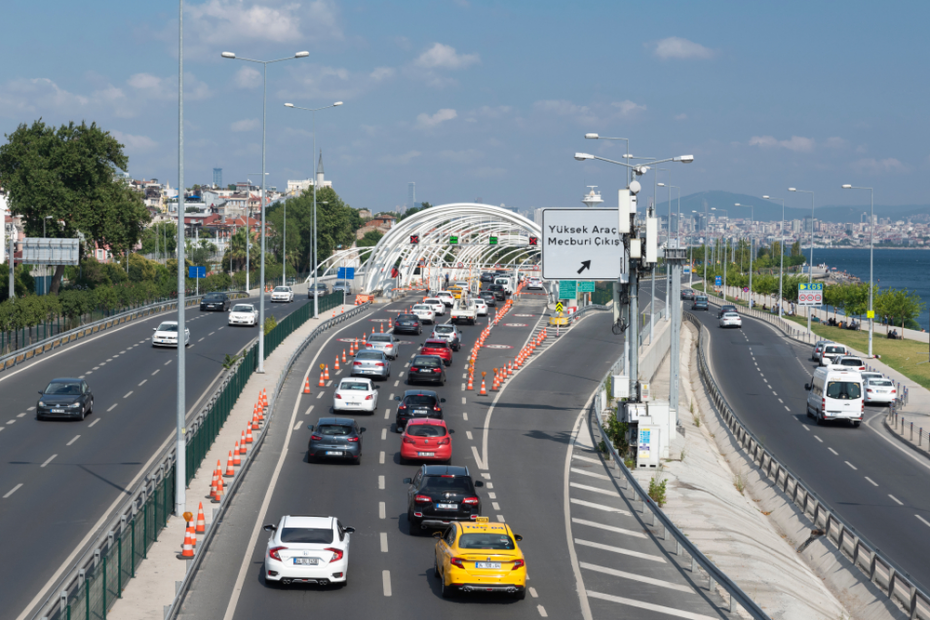 Upon completion of the project, Turkey, after USA, France and Malaysia, is fourth country in the world with submarine vehicle tunnels, the city Eurasian Tunnel, which is the busiest centers Fatih Sultan Mehmet Bridge and the E-5 traffic congestion on the highway appears to significantly reduce. The Eurasian Tunnel is seen to significantly reduce traffic on the Fatih Sultan Mehmet Bridge, the busiest centers of the city, and the E-5 highway. The tunnel was built to withstand an Earthquake of magnitude 9 due to its proximity to the fault lines also, speed control is provided by closed camera system, event detection system, communication and warning systems that monitor every point 24/7.

Major transportation projects in Turkey, which is part of the attempt to make Turkey one of the world's ten largest economies by 2023 is shaping up particularly on Istanbul. Since 60% of the businesses in Istanbul are growing on the European side, the majority of the city's residents in Asian side are forced to go to central areas such as Beyoğlu, Şişli, Levent and Maslak every day. Therefore, it is planned to reduce this intensity in the south by creating new employment centers in the north of the city. 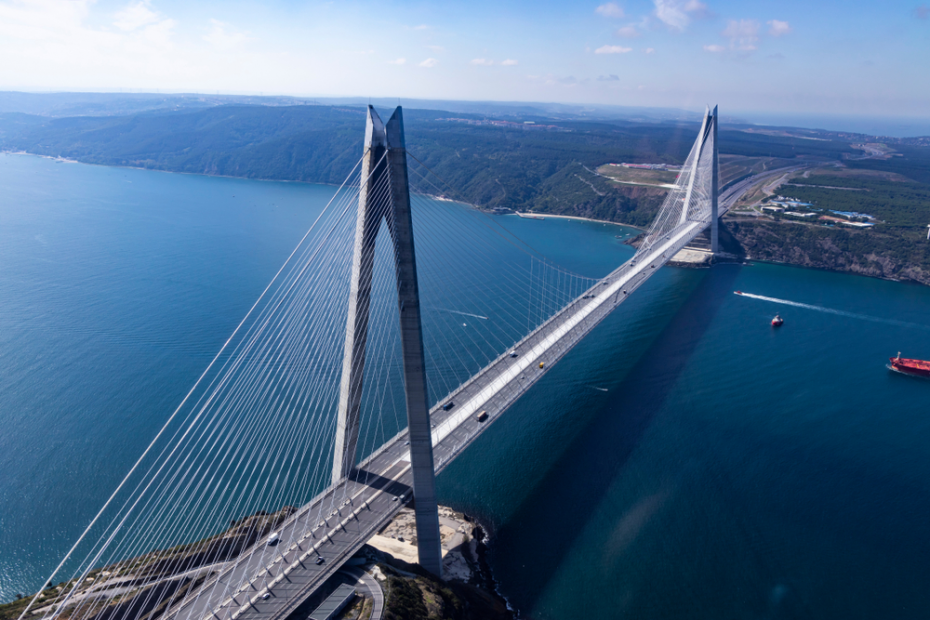 Yavuz Sultan Selim Bridge, the world's eighth longest suspension bridge, which is the world's largest, longest bridge for rail and motor vehicles, opened at the end of 2015, includes 8-lane highway and 2-lane railway connections. The bridge bearing the name of Yavuz Sultan Selim, one of the 16th century Ottoman sultans, is considered as a part of the Northern Marmara Motorway, which was built outside the urban areas of Istanbul. The 3 billion dollars bridge project is planned to be integrated with Marmaray and Istanbul Metro and connected to the newly constructed Istanbul Airport and Sabiha Gökçen Airport. 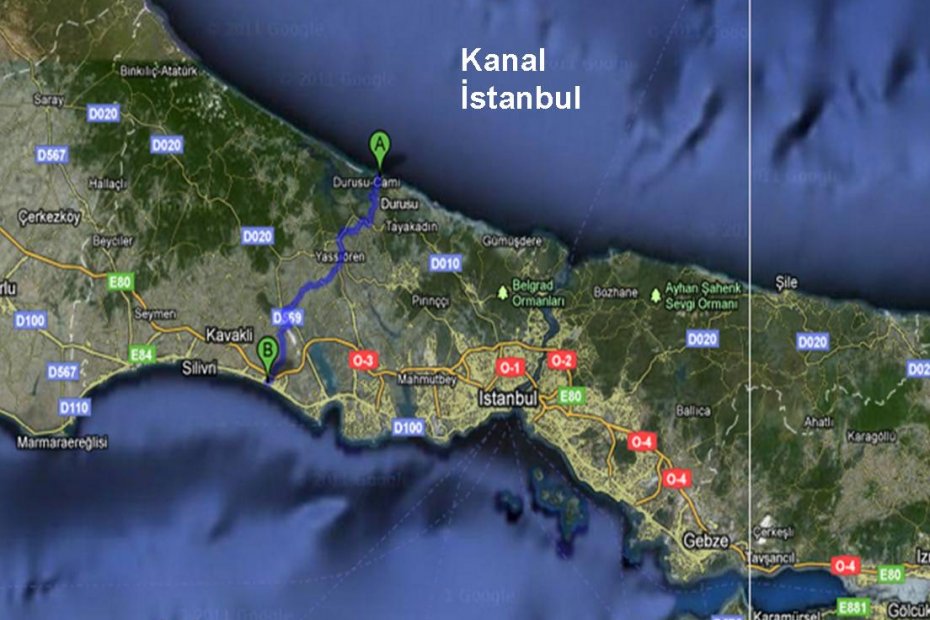 When the channel, which will cover Avcılar, Küçükçekmece, Başakşehir and Arnavutköy districts of Istanbul, is completed, it is expected that it will reduce the ship traffic passing through the Istanbul Strait, especially the oil tanker traffic. It is envisaged that more than 6,000 people will be employed during the construction phase and permanent employment of 1,500 during the operation phase. After the completion of the geological, geotechnical, hydro-ecological and environmental impacts, the construction phase of the project is expected to begin The construction of the channel is being watched with interest as it will not be subject to the international agreement, such as the Montreux Convention in 1936, which restricts the access of warships from Black Sea to Mediterranean sea, which is considered a strategic backyard by Russia. Because man-made channel passes through Istanbul, not linked to any international agreement, will be organized by Turkey.

Turkey will reduce the long distance travel by high-speed railways which, has started constructing since 2003. The country's capital, Ankara, developed during this period and by combining it with largest population center, Istanbul, first planned high-speed railway line will serve more than 17 million people. Thus, with the project developed in three stages between Ankara-Eskişehir, Eskişehir-İstanbul and Halkalı- Pendik, the travel time between Ankara-İstanbul seems to have decreased from 6 hours and 30 minutes to 3 hours. 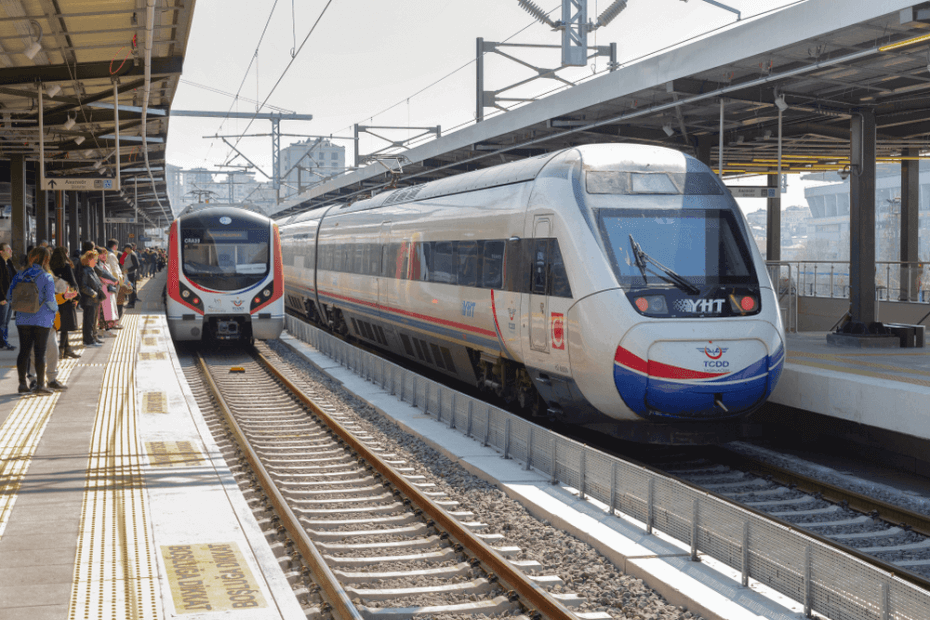 In March 2019, Bostancı, Söğütlüçeşme, Bakırköy and Halkalı stations were also integrated with Marmaray and started working. In Ankara - Istanbul High Speed Train Project, only a part of Turkey's major investment for transportation projects, mainly in Ankara- Konya, is invested on the underway works for an uninterrupted high-speed train network from Edirne to Karsa. When the Kars-Tbilisi-Baku railway combined with Marmaray rail transport, extending from China to Europe, Turkey, is expected to play an important role.

Turkey, a perfect transit point between Europe and Asia, also it offers advantages by providing convenience for those who want to obtain Turkish Citizenship by purchasing real estate. Major transportation projects in Turkey, Turkish citizens as well as who got Turkish citizenship by purchasing minimum of 400,000 USD worth real estate, facilitates their lives. Turkey, which is in the process of visa liberalization with the European Union and maintaining full membership negotiations with the European Union, real estate investment got more attractive to non-Turkish investors with the support of professional organizations such as Trem Global. Following the completion of the visa liberalization process, Turkish citizens are expected to gain visa-free travel to the European Union. Advanced transport networks, large scale highway, airport, subway, bridge and canal itself attracts investors from all over the world to work with Turkey, also, it is preferred by the vast majority of foreigners who want to Invest in Real Estate.

Property Costs in the UAE
Emirati Cuisine: Dubai Food Festival
What Are the Costs for Property Investment in Cyprus?