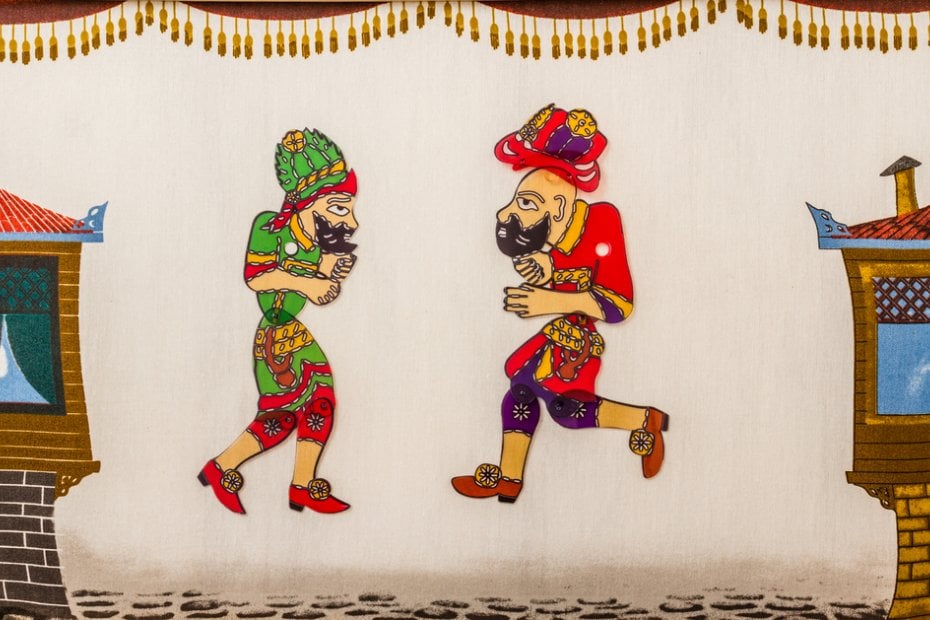 Karagöz and Hacivat are the two best known actors of the traditional Turkish shadow puppetry. In front of a curtain illuminated by light, this old Turkish traditional art of entertainment meets the audience with the animations of puppets of two characters and other characters supporting them behind the curtain, reflecting the most entertaining memories of Turkish culture that have accumulated for centuries. Even though we cannot meet them at every corner in modern times, with the arrival of Ramadan, the demonstrations are made with the adoption of local institutions after the iftar and brings memories of many people to the present day.

Shadow plays consist of oral literature, which has existed in the past of every culture, through the humor and satire of social events by accumulating and flowing to the present day. Karagöz and Hacivat, also known in many countries, cannot be shared by whom it was first found and exhibited because of the popularity of this fame. It is accepted by many authorities that Karagöz and Hacivat characters were first discovered by the Turks. However, as in the case of the Turkish baklava, Greece, a neighboring country across the Aegean Sea, applied to the European Union to obtain the patent of “Karagöz and Hacivat,, while the International Puppet Union (UNIMA) states that Karagöz and Hacivat were much earlier than the Greeks in Turkey, then denies patent application Hacivat and Karagöz, which have lived in their own cultures in many geographies for centuries, are accepted by international organizations as an important element of Turkish culture. 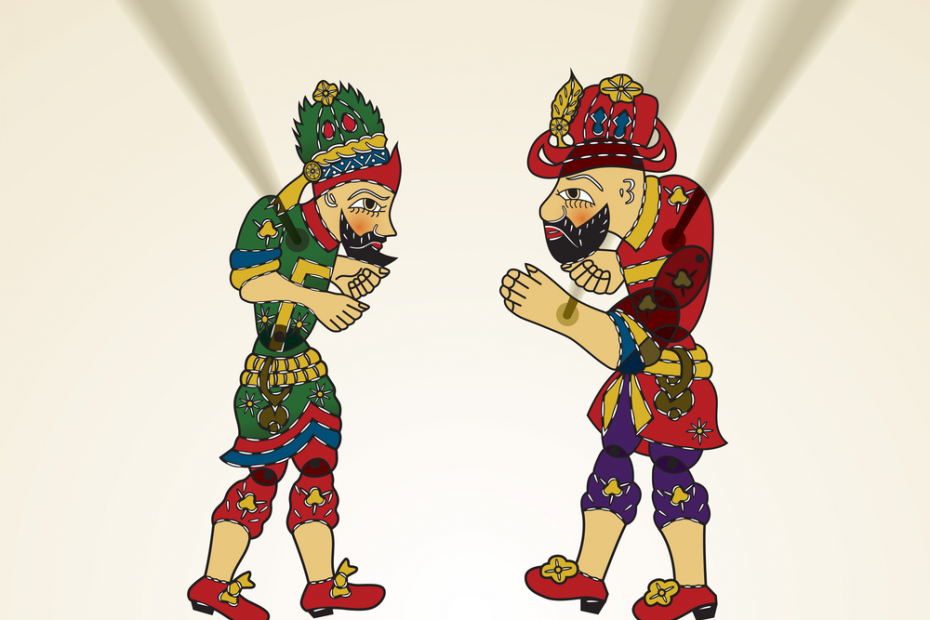 Shadow Puppetry that Unique to Turks: Karagöz and Hacivat

The 9th Ottoman sultan, who conquered Egypt in 1517, the 88th Islamic caliph and the first Turkish-Islamic caliph Yavuz Sultan Selim, invited the shadow artist who portrayed the execution of Tumanbay, Sultan of Memluk, to show the play to his son, who is the tenth sultan of the Ottoman Empire and the 89th Islamic caliph, Suleyman the Magnificent. In this way, shadow play began to be played for the first time in fertile Anatolian lands. The official document proving that the shadow play was first played in the palace in the Archives of the Ottoman Empire, which has 95 million different documents. In the document named “Surname-i Humayun“which was determined to belong to 1582, it is understood that the princes who were the heirs of the sultans, Karagöz and Hacivat took the stage especially during the circumcision ceremonies.

Who were Karagöz and Hacivat?

One of the most powerful rumors about this issue is that they lived during the reign of the Ottoman Sultan Orhan Gazi, the son of Osman Gazi, the founder of the Ottoman Empire, and the son of Malhun Hatun. Kambur Bali Çelebi (Karagöz), who works as an iron master in the construction of Sultan Orhan Mosque in Bursa and Halil Hacı İvaz (Hacivat) , who is a wall master in the construction of the mosque, has quarrels while working and the conversations with each other are followed with great interest by the public. In the Ottoman urban plan, mosques were planned to be the center of the city, and the confrontation of the iron master and the wall master, which attracted the attention of the public, has been moved to a different dimension with the participation of the workers working in construction.

For this reason, as a result of the disruption of the works and the prolongation of the construction, it is determined by the sultan of the period that it was their responsibility, and both are executed because of the failure of this responsibility. After this decision, it is the Sheikh Kushteri who gives comfort to the sultan who regrets about this decision. It is rumored that they first took part in the shadow play with Sheikh Kushteri removing the turban from his head and turning it into a curtain, putting a light behind it, and portraying Karagöz and Hacivat with his shoes. Karagöz and Hacivat games have been known as shadow play, “mirror“or “imaginary curtain “ which are the curtain of Karagöz until today and it was also called Sheikh Kushteri Square since it was the first Sheikh Kushteri who created it. For this reason, in the traditional Turkish shadow play art, Şeyh Küşterı is accepted as the master of Karagöz and Hacivat scenes.

Karagöz and Hacivat appear as two opposing characters. Their behavior, thoughts and speeches are the most significant indicators of this contrast. When we look at the character of Karagöz, we see that he has a righteous personality, he depicts a brave but at the same time blasphemous, angry and generally happy, belligerent, uneducated, married character; Hacivat, on the other hand, depicts a character who does not hesitate to lie, has a coward, calm mood, is unhappy, insidious, intellectual, single and generally impolite in his treatment of people.

We see that Karagöz is portrayed as a man of the people, as well as being pure. Uneducated Karagöz responds to each word he hears from Hacivat and understands with a different meaning according to his knowledge. Karagöz, who has a unique meaning in every event, is in the middle of the events and he is in a difficult situation with his speech. On the other hand, thanks to the ready-to-respond feature, he manages to stand out from the events without getting into trouble.

It is Hacivat who finds a job to Karagöz, who walks the streets of Bursa as unemployed.

In the shadow game, we find Karagöz in different types according to the subject of the games. In general, we see him as “Watchman Karagöz”, “Kadı Karagöz”, “Karagöz with Drums”, “Donkey Karagöz”, “Naked Karagöz ”. On the other hand, Hacivat, who is an orderly person, has a more self-seeking appearance. Hacivat, who exhibits attitude and behavior by looking at his own interests, responds to Karagöz in a witty manner as he is more educated compared to Karagöz. Hacivat, who generally chooses his sentences from languages that people cannot understand, has a wide social environment and finds a job for Karagöz and continues his life with his earnings. Therefore, in various plays, we see that the character of Hacivat is in the form of “Goat Hacivat”, “Naked Haciat”, “Female Hacivat”, and “Butler Hacivat”.

Other Figures on the Screen of Imagination

People who watch the stories and performances of the opposite character, who emerged centuries ago, have fun, while life lessons are taken on two opposite characters, and witty speeches reveal the realities of life to different eyes. In Karagöz and Hacivat imagination screen, Çelebi, Matiz, Tuzsuz Deli Bekir, Tiryaki, Acem, Zenne, Laz, Beberuhi support the plays as side characters, by this way, the style of the peoples in the country's geography at that time is carried to the stage.

Making the Screen of Imagination and Figures

Starting with the shaping of leather pieces, the process reveals the characters by dyeing the skin with different colored root dyes. Since the artist who performs the shadow play is called “dreamer “ the characters come to life with the voice and the movements in the hands of the dreamer. In this scene, the apprentice (assistant), Sandıkkar (other assistant), Yardak (in the household), Dayrezen (Def playing) and Hammal (carrying Karagöz zembil) help the imagination. To become a dreamer in the traditional Turkish shadow play is only realized by the help of dreamers to their helpers. Because it is thought that the people who grew up in the procession might have the characters, the characteristics of Karagöz and Hacivat and the ability to give the appropriate voice and movements.

We see that the skins of the animals in Anatolia (cattle or camel skin) are used for the shadow play scene, which is formed by the backlighting of a white curtain stretched on a wooden bench. The holes on the figures, which are made with holes on various limbs, are moved by passing wooden bars of appropriate sizes. On the side of the curtain's imagination, which is Behind the curtain, there is a “back board“ . Oil lamps and bulbs used in the shadow play, which are the instrument of light of the period to illuminate the tambourine, bell, nareke, reed and curtain, are found on this backboard. All of the above-mentioned characters are made of leather by a special method is made transparent and is processed with a sharp knife called "Nevregan". After all the pieces are connected to each other with ropes called “Kishir” or “Katgut”, the characters are painted with tile inks or root paints.

This Turkish shadow play, which was exhibited mostly for adult people in the old times, was one of the sources of social criticism among the people of the period by including political satire and it was censured after one of the first concrete steps of the Westernization of the Ottoman Empire then has become a children's play and traditional.

Hacivat: My beloved! I am in need of a pleasureful passtime!